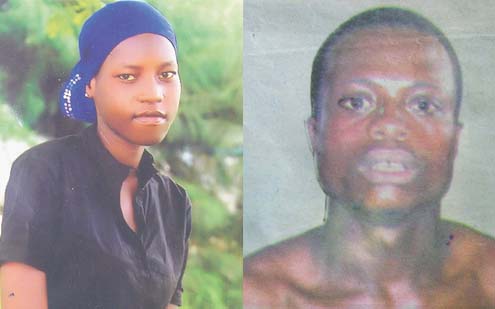 An alleged cultist has been arrested for stabbing his ex-girlfriend to death after raping her.

The suspect, Anuoluwapo Akinloye, 25, who lives at Segun Kehinde Street, Ogijo in Ikorodu, Lagos State, southwest Nigeria, allegedly raped and stabbed Rafiat Akinyemi to death because she broke up with him.

According to the victim’s mother, Mrs. Rashidat Akinyemi, the girl, a devoted Muslim, had at the beginning of their relationship told the suspect that she can’t marry him because of his religion but the suspect converted to Islam and changed his name to Ismail and started going to the mosque.

The widow, who lost her husband two years ago, said the alleged cultist even applied for a post in the security department of the mosque but the mosque was still considering his offer before he carried out the heinous act.

Mrs. Akinyemi said when her daughter discovered that the suspect was a cultist, she ended the relationship but the suspect refused to let her go.

Mrs. Akinyemi said: “A few weeks before her death, Rafiat told me that the man threatened her life when she told him to keep away from her after discovering that he was a cult member.

“I called Anuoluwapo and talked to him like a mother. I told him to take it easy with her and allow her concentrate on her education. Another member of the family also called the suspect and told him that marriage is not by force and that he should stop threatening her. That was just three days before the incident. We did not know that he planned to kill my daughter.”

The widow alleged that on 30 April, she went to the market on Lagos Island and left Rafiat in the house.

She said she instructed Rafiat to open their shop in front of their house as soon as she finished her house chores but when the mother came back around 2 p.m. she found out that the shop was still closed.

Mrs. Akinyemi said she was surprised and went inside the house to challenge her daughter but met her dead in their parlour.

She said she screamed and shouted for help. And when she looked closer at her daughter, she discovered that she was raped and stabbed to death.

The incident was reported at the Ogijo Police Station and a team of policemen later came to remove her corpse.

Mrs. Akinyemi disclosed that Anuoluwapo initially told the police that he did not act alone and that five others participated in the crime.

The mother said Anuoluwapo confessed that one person stayed at the entrance of the house while the remaining five went inside. His accomplices, she alleged, held the victim down while Anuoluwapo raped her and later stabbed her to death.

Mrs. Akinyemi appealed to the police to bring Anuoluwapo and his accomplices to book over the killing of her daughter.

P.M.NEWS  learnt that  the suspect has been transferred to the Ogun State Police CID Headquarters at Eleweran, Abeokuta, for interrogation.