75 Heads of state expected in Addis Ababa for AU summit 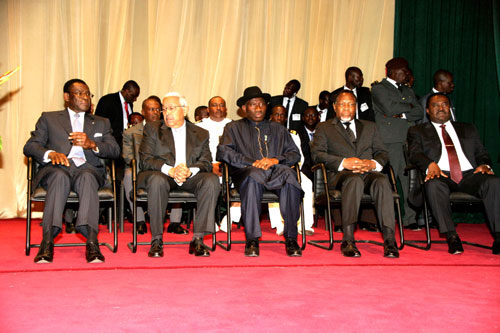 African leaders at an event: need to look at visa policy for Africans

The African Union Commission (AUC) says 75 Heads of States and Governments from AU member states are expected to attend the 21st African Union Summit, scheduled to hold from May 19 to May 27 in Addis Ababa.

The OAU was established on May 25, 1963 in Addis Ababa on a signature of the OAU Charter by representatives of 32 governments including Nigeria, while 21 States joined gradually over the years.

South Africa became the 53rd member on May 23, 1994 after the first multi-racial elections that ushered in Dr Nelson Mandela as the first democratically elected black African president of the rainbow nation.

South Sudan became the 54th state to join the AU after securing independence from Sudan on July 9, 2011.

The OAU was formed to promote the unity and solidarity of African States, coordinate and intensify their cooperation and efforts to achieve a better life for the peoples of Africa; defend their sovereignty, territorial integrity and independence.

Part of the objectives of the OAU was to eradicate all forms of colonialism from Africa; promote international cooperation, with due regard to the Charter of the United Nations and the Universal Declaration of Human Rights.

The OAU later transmuted into the AU following the adoption of the Act of the African Union during the Lomé Summit of the OAU on July 11, 2,000.

Meanwhile, the statement said activities of the summit and 50th anniversary will kick off in Addis Ababa, Ethiopia on May 19, with a preparatory meeting of the Permanent Representatives Committee (PRC) of the AU.

“The year long celebrations will include a commemorative summit, celebrations, sporting and cultural events as well as a gala dinner.

“These events will coincide with the Special Commemorative Summit on May 25, on the theme: “Pan Africanism and African Renaissance”.

It said the 21st Assembly of the Heads of State and Government will hold between May 26 and May 27, where adoption of various proclamations will take place.

“The Commemorative Summit and associated events will be attended by about 75 Heads of State and Government coming from the continent and beyond.

“Several build up, parallel and side events will take place in the week of May 19 to May 27, which include an African Youth and Children’s Intergenerational Forum to be addressed by Kenneth Kaunda and Sam Nujoma, former presidents of Zambia and Namibia, respectively, among others.”

The statement said that the Pan African Chamber of Commerce and Industry (PACCI) would also convene a one-day dialogue on “Securing Africa’s Renaissance: the Role of the Private Sector in the next 50 years’’.

“In order to ensure a transparent and all-inclusive commemorative summit and celebrations, the AU has, so far, accredited about 450 journalists from Africa and beyond.

It said that the journalists would receive a live feed of all proceedings through the web and Ethiopian TV based broadcast.

“A media centre and media hotspots have been set up for the first time in AU history, so as to ensure better coverage for the event.”

It said that a youth forum would also be hosted at the AU Conference Centre and Africa Hall (where the OAU was founded 50 years ago) at the instance of the Economic Commission for Africa (ECA), between May 22 and May 24.

It said that the PACCI dialogue would be hosted on May 24 by ECA, while a debate on the adopted theme of “Pan Africanism and the African Renaissance’’ would hold at the commission’s conference centre on May 25, with the media, guests and civil society participating.

The summit would be concluded with the 21st Summit of the Heads of State and Government, which will commence on May 26 with an open session and would roundup with the adoption of proclamations on May 27.