Azarenka sets up dream final with Serena in Rome 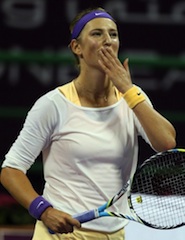 Victoria Azarenka has set up a Rome Open final with world number one Serena Williams after ending local hopes of a dream final with a 6-0, 7-5 win over Sara Errani on Saturday.

Azarenka’s all-round more powerful and varied game carried her through a first set that was interrupted three times – twice by rain and once by Errani calling for her coach after dropping the first three games.

Errani, who had beaten the Belarusian only once in their six previous encounters, emerged with bigger ambitions in the second set.

But despite battling all the way, she was broken by the tournament third seed in the 10th game before Azarenka served to take a 6-5 lead.

Errani saved three match points in the final game but was finally broken by the more powerful Belarusian, who will face Williams in a final for the first time since her win over the American earlier this year in Doha.