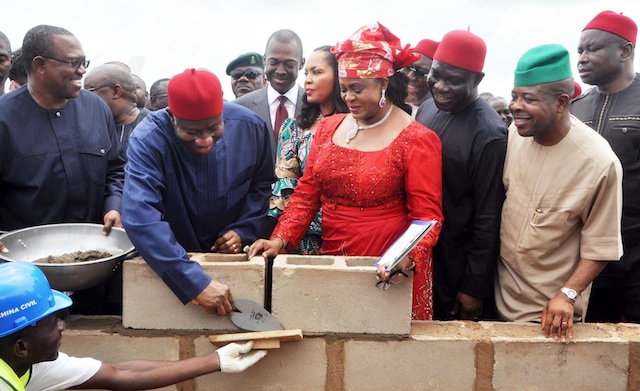 Jonathan at the Akanu Ibiam Airport

President Goodluck Jonathan has promised to establish a free trade zone in the South East to boost economic activities in the area. He made the promise at the ground-breaking ceremony of the international wing of the Akanu Ibiam International Airport in Enugu on Saturday.

The president, who noted that a free trade zone would only be operational where there was an international airport or a functional seaport, said the facility had been over-due in the zone.

“When the governor of Enugu State was making the request of a free trade zone, I was smiling in my mind. The certificate is right for the zone so you do not need to ask.

“Free trade zones can only be functional if it has access to a functional seaport or international airport, so it is something that has been approved before you requested for it so, you can go and sleep,’’ he said.

The president also promised to establish a cargo terminal for perishable food items at the airport for the quick processing and evacuation of agricultural produce from the farm to consumers abroad.

According to him, when the cargo is constructed, it will give Nigerians the opportunity to export agricultural produce and create wealth at home.

“The opening of this airport is one of the key requests I received from my brothers and sisters from the South East during my campaign for the election as president in 2011.

“ I promised them to bring about the transformation of our economy and nation. Today, it is a historical fact as we have fulfilled our promise,’’ the president said.

Earlier in a welcome address, Gov. Sullivan Chime of Enugu commended the president for his transformation agenda and the plan to exploit the abundant coal deposits in Enugu.

Chime appealed to the Federal Government to intensify the pace of work at the Makurdi-Enugu-Umuahia-Port Harcourt railway.

He called on the aviation ministry not to relent until the Akanu Ibiam International Airport became fully operational.

The governor said a free trade zone, to be situated in Enugu, would assist the entrepreneurial skills of the people.

Also speaking at the occasion, the Minister of Aviation, Princess Stella Oduah, said the airport terminal would be completed within 15 months.

Oduah said the national airports modernisation programme of the Federal Government was part of the president’s transformation agenda toward remodeling the aviation industry.

The event was attended by governors, National Assembly members, ministers, former governors as well as captains of industry from the zone.

Some of the stakeholders who spoke with the News Agency of Nigeria (NAN) commended the president for fulfilling his campaign promises to the zone.

They, however, called on him to ensure the speedy completion of federal roads in the zone.