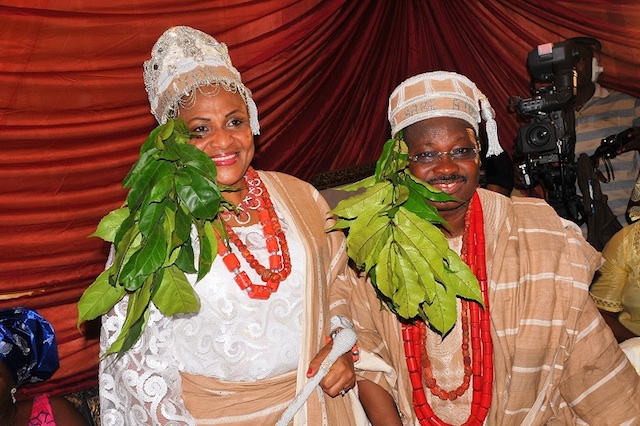 The ceremony was witnessed by a large crowd of political bigwigs and senior citizens of Ibadan.

Speaking after his formal installation along with his wife and the presentation of certificate, Governor Ajimobi noted that he had turned down many chieftaincy titles from many monarchs from the state but accepted that of Olubadan because of his belief that the monarch gave him the title based on his objective assessment about his performance in the last two years of his reign.

Expressing profound appreciation to the Olubadan for the honour bestowed on him and his wife, Ajimobi described the Olubadan as a highly revered and principled traditional ruler who would not dole out chieftaincy titles to anybody who did not deserve it, no matter the person’s status in the society.

His words, “We are all very proud of the Olubadan of Ibadanland. Ibadan people are very tough. They are not given to frivolities. If they deem it fit to honour you, you should know that you really worth it”.

He thanked the Central Council for Ibadan Indigenes (CCII) and the Ibadan Elders’ Forum for their usual support stressing that the honour done him and his wife would further spur him into performing more than before in his quest at transforming and repositioning the state for socio-economic development.

Speaking on behalf of Olubadan, Otun Olubadan, High Chief Omowale Kuye said, “It is long we saw development in Ibadan last. It was last witnessed during Awolowo’s time, but Ajimobi has done it. The Olubadan enjoins you to continue to do well so that any governor that comes after you can be told to follow your foot step. Aare Atunluse title is a special title given to the governor. After him, anyone who performs the feat he has performed will be installed as Atunluse, while the governor remains the Aare. We have got a flyover, but we need more. Ibadan is now clean, but we need further developments in it”.
He explained that in the past few years, relationship between the palace and the government was not cordial, “but we thank God, things have changed. We need more of these developments”.

National Chairman, (CCII), Chief Bayo Oyero in his remark said Ajimobi first rejected the title when he was offered, but heaccepted later having been told the essence of it and that the Olubadan was in support of the initiative..

Oba of Lagos, Oba Rilwan Akiolu, Eleruwa of Eruwaland, Oba Akingbola Akindele and Ajinase, Oloogunebi, the Aseyin of Iseyin, Oba Salawu Ganiyu Salau, were among the traditional rulers seen at the event, which took place at the Monatan residence of the Olubadan, in Ibadan, capital of Oyo State