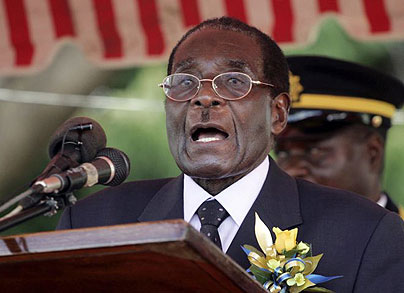 A lecturer at a government university in Zimbabwe has been jailed for three months for labelling veteran President Robert Mugabe “a rotten old donkey,” in the latest such case, lawyers said Saturday.

Chenjerai Pamhiri, 38, a lecturer at Great Zimbabwe State University in Masvingo city, was convicted and jailed on Friday by a magistrate on Friday, Zimbabwe Lawyers for Human Rights said.

Prosecutors alleged that Pamhiri, while doing his shopping at a local supermarket last week, shouted that Mugabe was “dirt which should be discarded, a rotten old donkey”. He is also said to have urged people not to vote for him in elections expected sometime this year.

Police arrested him as he left the supermarket.

“We received the shocking news of the conviction and sentencing of Pamhiri and we have promptly moved in to assist him,” Kumbirai Mafunda, spokesman for the human rights lawyers, told AFP.

“Our lawyers will file an appeal against the conviction and sentence and a make a separate application for bail pending appeal.”

Arrests for slandering Zimbabwe’s long-time president and breaching the strict public order law are common and those found guilty usually get away with light sentences, fines or are ordered to do community service.

Mafunda said rights lawyers have recorded over 60 such cases since 2010.