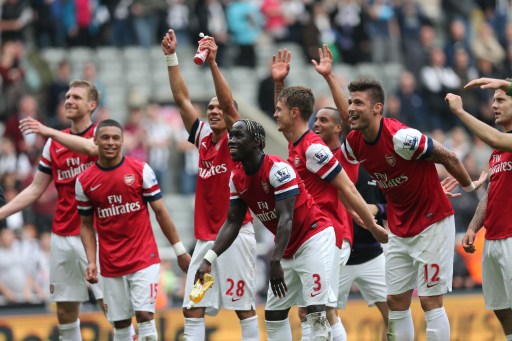 LONDON(AFP) – Arsenal won the race for fourth place in the Premier League with a 1-0 victory at Newcastle, while Alex Ferguson’s extraordinary career ended in remarkable fashion as Manchester United drew 5-5 at West Bromwich Albion on Sunday.

Arsene Wenger’s side needed three points to guarantee a spot in next season’s Champions League qualification rounds ahead of north London rivals Tottenham and Laurent Koscielny’s second-half strike ensured they achieved that aim.

Koscielny’s goal meant more heartache for Spurs who once again had to settle for a place in the Europa League that comes with finishing fifth despite their 1-0 win against Sunderland at White Hart Lane.

“The players are special. I’ve told them many times but they’ve shown it in the last two months they’ve been absolutely exceptional,” Wenger said.

Tottenham manager Andre Villas-Boas added: “It is difficult to take. In the end we did what we had to but Arsenal did their job well and go through. It is difficult at this moment.

Ferguson was taking charge of United for the 1,500th and final time before retiring and the Scot looked set to bow out with a win as the Premier League champions romped into a 5-2 lead.

But Albion scored three times in the last nine minutes in an incredible finish to spoil Ferguson’s farewell at the Hawthorns.

“5-5, what a mad result! Let’s be honest, the boss was never going out with a boring 0-0,” United defender Rio Ferdinand tweeted.

United striker Javier Hernandez added: “We wanted to win it, but the gaffer is certainly going to remember his last match. He has put the club on the top and we’re going to miss him.”

The victory secured Arsenal’s 16th consecutive Champions League qualification and will ease the pain of another trophyless season for the Gunners, who trailed Tottenham by seven points at the start of March.

Spurs struggled to break down Sunderland until the closing moments, even though Black Cats midfielder David Vaughan was sent off for a second booking in the 75th minute.

They finally took the lead when Bale cracked a stunning strike into the top corner from long range in the 90th minute, but Arsenal were just seconds away from victory by then.

Since taking charge of United for the first time in a 2-0 defeat at Oxford on November 8, 1986, Ferguson has amassed an incredible 38 trophies, including 13 Premier League titles and two Champions League crowns.

This was his swansong, as well as the final game before retirement for United midfielder Paul Scholes, who came on as a second-half substitute, and it was suitably dramatic.

Alexander Buttner smashed in United’s third in the 30th minute before James Morrison got one back for the hosts in the 40th minute.

Romelu Lukaku scored for Albion in the 50th minute before Robin van Persie netted for United three minutes later and Hernandez bagged the fifth in the 63rd minute.

Yet Albion provided an incredible finale as Lukaku and Youssouf Mulumbu both scored in the space of 60 seconds in the 81st minute before on-loan Chelsea striker Lukaku completed his hat-trick to equalise in the 86th minute.

Ferguson will be succeeded at Old Trafford by Everton manager David Moyes, who saw his team beaten 2-1 at third-placed Chelsea in his farewell after an 11-year reign.

“It’s emotional because it’s the last time I walk away from the players but part of the job is you move on,” Moyes said.

Chelsea’s interim manager Rafael Benitez, who masterminded the team’s Europa League final victory over Benfica in Amsterdam in midweek, was also saying goodbye, with Jose Mourinho reportedly lined up to return to west London once he quits Real Madrid.

“I am really proud because we have a team in transition and you can see young players, playing 69 games and doing well to the last game,” Benitez said.

On a day of emotional farewells, Jamie Carragher captained Liverpool on his 737th and final appearance for the club, a 1-0 win over already-relegated QPR at Anfield.

Carragher hit a post in the second half, but Philippe Coutinho got the only goal, lashing home from long-range in the 23rd minute.

Stoke striker Michael Owen made a 16-minute cameo appearance before his retirement in his team’s 1-1 draw at Southampton.