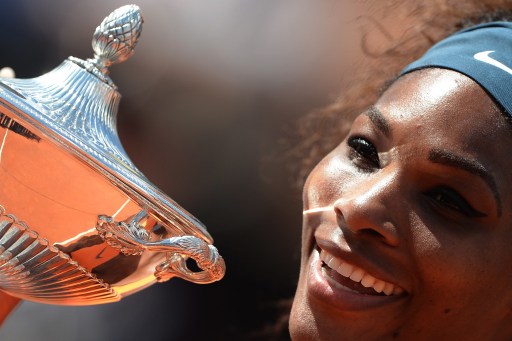 Serena Williams with her trophy in Rome. AFP

In what was his 30th meeting with Roger Federer, clay court king Nadal outclassed the Swiss 6-1, 6-3 as he continued his stunning comeback following a seven-month injury absence.

Williams, who will head to Paris next week hoping to avenge her stunning first round defeat to Frenchwoman Virginie Razzano last year, was in equally imperious form as she swept aside Victoria Azarenka 6-1, 6-3.

Nadal’s triumph means he now leads Federer 20-10 in their series, with 13 of his wins coming on clay.

He also now has 24 Masters titles in a career total of 56.

Ahead of his bid to extend his record run of seven victories in Paris, Nadal admitted he had never dreamed of such success — he now has 36 wins in 38 matches since his return to the tour in February.

“If you’d told me that four or five months ago I would have said you are crazy,” said fifth-seeded Nadal.

“So after eight tournaments, six victories, and two finals, it’s a dream for me.”

Federer, the second seed, had overcome French upstart Benoit Paire in a late semi-final on Saturday to make his first final of the season.

But despite winning the opening game on serve on Sunday the Swiss failed to really get a grip on the match.

In all, Federer finished with 32 unforced errors to Nadal’s eight.

“He played very aggressively from the start, he didn’t make too many mistakes and had a good match overall,” said Federer, who admitted the change in class from his previous challengers this week had been a factor.

“Rafa has much more top-spin than all the guys I played this week, so the change was quite a big one.

“I tried to play offensively, but unfortunately I didn’t have the best day. It didn’t go the way I was hoping it to go.”

She broke Azarenka’s serve three times in a one-sided first set and despite a tighter second set the American prevailed to stretch her career-best winning streak to 24 matches.

It was Williams’s 51st career title and took her victory tally over Azarenka, who beat the American earlier this season in the final of the Doha hardcourt event, to 12-2 in their series.

Williams said the match was closer than the score suggested.

“It was very close, the first three games were over 20-25 minutes or so, so it wasn’t really easy out there. Nothing is really easy,” said the American.

“I just took the opportunities when I had them. I know she (Azarenka) did as well, but I came up with the good shots sometimes.”

Azarenka agreed the match had been closer than the score suggested but admitted: “She definitely showed some more incredible tennis today… she’s been playing her best tennis for the past year and a half or so.

“But today she played much better in the key moments of the match.”

It is Williams’s second title at Rome, having first won the event in 2002.

And after conceding defeat to Razzano in last year’s first round at Roland Garros, the American said she is taking a different approach this year.

“It’s definitely different. It has to be,” she said.

“I was feeling excellent last year and didn’t do great. This year I’m more cautious. I want to work hard and stay focused and win every point hard and not slack at all.”