Nigeria not in Obama's itinerary in second African trip 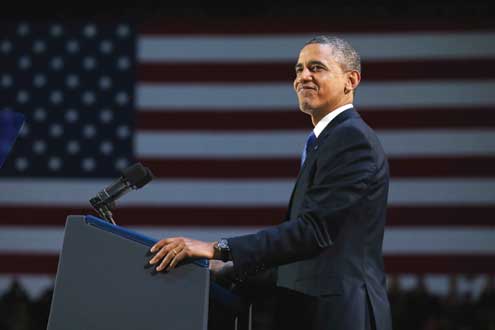 US President Barack Obama in his planned second visit to Africa has snubbed Nigeria again.

Obama will head out on his first major African tour since taking office, traveling to Senegal, South Africa and Tanzania from June 26 to July 3, the White House said Monday.

Obama, born in the United States to an American mother and a Kenyan father, has so far only been to one sub-Saharan African country since becoming president: Ghana, in July 2009.

The trip aims to “reinforce the importance that the United States places on our deep and growing ties with countries in sub-Saharan Africa, including through expanding economic growth, investment, and trade; strengthening democratic institutions; and investing in the next generation of African leaders,” press secretary Jay Carney said in a statement.

Obama will meet with officials, businessmen, and civil society leaders, including youth, in a trip that underscores his “commitment to broadening and deepening cooperation between the United States and the people of sub-Saharan Africa to advance regional and global peace and prosperity.”

First Lady Michelle Obama will accompany the president on the trip, the National Security Council said on its Twitter account.

His wife, however, went on a trip in southern Africa in June 2011, during which she met former South African president and anti-apartheid hero Nelson Mandela.

At the end of March, Obama welcomed at the White House his recently elected Senegalese counterpart, Macky Sall, along with the leaders of Sierra Leone, Malawi and Cape Verde, lauding them as examples of “the progress that we are seeing in Africa.”

In 2011, Obama received four other African leaders at the White House, the presidents of Benin, Guinea, Niger and Ivory Coast. He had promised them the US would remain a “stalwart partner” to democracies in Africa.

In June 2012, Obama unveiled a sweeping new Africa strategy, with the goal of reinforcing security and democracy on a continent facing the threat of Al-Qaeda and a Chinese economic offensive.

The new US blueprint seeks to boost trade, strengthen peace, security and good governance and bolster democratic institutions, declaring that a continent torn by poverty, corruption and discord could be the world’s next big economic success story.

In his speech before Ghana’s parliament in 2009, Obama proclaimed that even though the continent now needs international aid, “Africa’s future is up to Africans.”