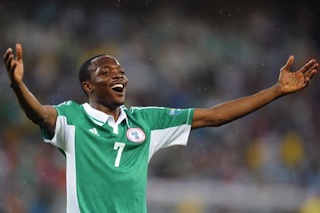 Ahmed Musa reacts after a goal for Nigeria at AFCON

It is confirmed that CSKA Moscow striker Ahmed Musa will miss Nigeria’s high profile exhibition game against Mexico on 31 May in the United States due to club commitments.

The former Kano Pillar player told Brila FM that he had been in contact with an official of the Super Eagles, informing him that he will miss the game if the Muscovites qualify for the Russian Cup final.

“I have been in contact with the team secretary of the Super Eagles and told him that if my team qualify for the Russian Cup final, I will not be available for the friendly.

“And when we eventually qualified the secretary called me again to confirm if I will still be able to come and I told him it wasn’t possible,’’ Musa said.

CSKA Moscow will win the double for the first time since 2005 if they overcome Anzhi Makhachkala in the Russian Cup final on 1 June.

Musa has played an integral role in CSKA‘s run to the title, scoring 11 goals in 25 league appearances.

He however revealed that he will be joining the Super Eagles squad in Germany on 2 June after the cup final.