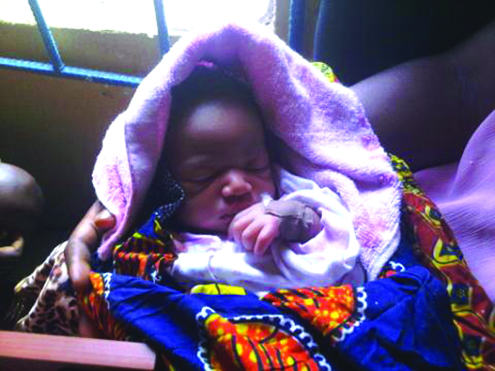 The baby who was reportedly wrapped with a dirty Ankara wrapper and dumped in front of a shop owned by a foodstuff seller, Mrs. Adeola Adefenwa, at 194, Ipaja Road, Orile, at dawn, was rescued by some human right activists from Committee for the Defence of Human Right, CDHR, and Concerned Human Right, Nigeria.

The baby was taken to Orile-Agege General Hospital, Oke-Odo where she was given adequate medical care and later transferred to Elere Police Station, Agege.

After some documentation at the police station, she was handed over to Sister Josephine Titiloye of the Catholic Archdiocesan Orphanage, St. Monica’s Home at 1, Victor Odunaiya Street, Off Agbado Road, Iju-Ishaga, Lagos.

Before the human right activists came to the rescue of the baby, people thronged the scene of the incident to have a look at the abandoned baby.

Most of them rained curses on the mother of the baby who dumped her to her fate. Some referred to the mother as a heartless woman, who despite the pain of pregnancy and childbirth, could leave her baby to die.

While some were busy taking the pictures of the baby and posting them on the social media, others stood helplessly watching the baby struggle inside the dirty wrapper she was wrapped in.

The residents of the area said that it is common to see babies, sometimes twins, being dumped inside Mulero canal around the area. They added that while some are washed away by flood, some are left to die inside the scorching sun.

Speaking with P.M.NEWS, Mrs Adefenwa,  said: “I was doing the house chores when a call came in from a neighbour who said a new born baby has been dumped in front of my shop. I had to abandon everything I was doing and rushed down there.

“In fact, I was confused when I got to my shop. I didn’t know what to do immediately and people started offering different suggestions. Some said I should call the police while some came up with different ideas.

“We were on this when some human right activists came in and suggested that we should first take her to the hospital and then proceed to a police station to report the case,” she said.

A member of the CDHR, Blessing Igwe, who saw the baby and later called the shop owner, said it was unfortunate that people who were at the scene of the incident did not show concern about the health of  the baby but were busy taking pictures of her and posting them on the social network.

“If I was not around to quickly call my people to come to the rescue of the child, maybe she would have been dead by now. When I saw people gathered at the scene, I moved closer to have a glimpse of what was happening. Immediately I saw the hapless baby, I called the shop owner and other activists in the area to come to her aid,” she said.

Speaking with P.M.NEWS, the human right activist who took the baby to Orile-Agege General Hospital, Comrade Declan Ihekaire, National Coordinator, Concerned Human Right Nigeria, commended the management of the hospital for their quick response in attending to the baby immediately she was taken there for medical attention.

Ihekaire also commended them for the provision of free drugs and clothes for the baby who was left unkempt where she was abandoned.

He, however, expressed dissatisfaction over the way the people at the scene of the incident handled the case, saying that they were more concerned about taking the pictures of the baby rather than keeping her alive.

“Nigerians should understand that in this kind of situation, saving the life of the baby is more important than taking photographs and posting them on the social media,” he said.