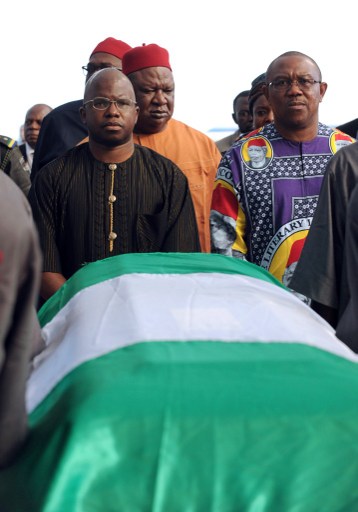 Prof. Chinua Achebe, the late Nigerian literary icon was buried this afternoon at his country home in Ogidi, headquarters of Idemili North local government area of Anambra state in a blaze of glory.

Leading hundreds of dignitaries from all over the world to bid Achebe final goodbye was President Goodluck Ebele Jonathan whose chopper touched down at about 10.50 am.

All governors of the eastern states were at the burial ceremony, with the exception of Sullivan Chime of Enugu state who was represented by his deputy. Delta state governor, Dr. Emmanuel Uduaghan was also on hand to say bye for now to Achebe.

Also at the burial service which was held at the St. Phillips Anglican Church, Ogidi were eminent dignitaries from all works of life, including members of the international community of writers.

Chief host at the event, Governor Peter Obi of Anambra state walked beside the ambulance carrying the remains of Achebe from Achebe’s compound to the church premises.

In his homily, the Bishop of the Niger, Rev. Father Owen Nwokolo, urged Nigerian leaders to learn from Achebe who he said devoted his entire life to service to humanity.

Rev. Father Nwokolo called on the members of Achebe’s family to rejoice at the exit of their illustrious son because, in his word, “Chinua Achebe could not have lived a better life.”

Prof. Achebe was later interred at the tomb erected in his compound by priests from across the easter states.

Earlier on Thursday evening, the well-polished mahogany casket bearing the remains of Achebe arrived at the community town hall at about 5 p.m where he laid in state. His body arrived at his country home at exactly 6.30 pm where a service of songs was held in his honour by the Anglican Communium.

Wife of the late writer, Prof. Christie Achebe, took no consolation as she literarily fell on the Mercedes Benz ambulance bearing the casket and wept uncontrollably, just as women of the Achebe family also thronged the compound, wailing and calling out in Igbo language, Ugo na abo (two eagle on a tree), meaning that Achebe, a rare person has gone.

The officiating priest, Reverend Father Osita Amacheze, based his sermon on the subject, A Time for Everything. Reading from the Bible book of Eccliastes chapter 3, he said there was time for affair by man on the surface of the earth, adding that it was the time for Achebe to exit the earth.

He urged the congregation, friends and relatives of the departed not to mourn his exit since he lived a fulfilled life that touched millions of lives.

“We came to make a joyful shouting to the Lord. We are not here to mourn because we are here for a celebration of life, a life that has been so well spent, that has touched so many of us,” Rev. Father Amacheze said.

Performance by various traditional groups spiced up the night.

Dame Ngozi Ezejum, née Achebe, first niece of the Achebe family, described the late writer as a traditional man whom she had fond memories of during his days at the University of Ibadan.

“Prof. Achebe was a humble and a traditional man to the core. He was fond of me, being the first niece of the Achebe family. Whenever he return from Ibadan in those days, he did his own cooking. I ran errands for him in getting condiments for his cooking, and in return, he would entertain me with music from his gramophone,” Dame Ezejum told PM NWES.

In the delegation of international community of writers that accompanied the remains of Prof. Achebe from the US to his country home were scholars from the Department of African Studies of the University of Massachusetts, including Prof. Ekwueme Michael Thelwell, Prof. Bill Lawler and a host of others.