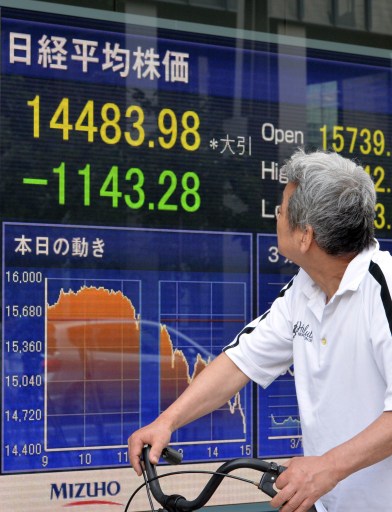 In terms of points, it was the heaviest one-day plunge since April 2000 when the benchmark index lost 1,426 points following the collapse of an “IT bubble,” which sent high-tech shares down sharply.

Trading was volatile with volume at a record 7.66 billion shares among first-section issues against 6.38 billion yesterday.

“Towards the end of the trading, panic selling was seen in massively heavy trading,” said Hirokazu Fujiki, strategist with Osakan Securities.

“We can’t tell whether or not this was a temporary storm of selling before watching reactions from US markets later today,” Fujiki told AFP.

The losses in Tokyo set off a chain of drops in Europe when the markets opened.

The huge drop in Tokyo came after HSBC said manufacturing activity in China contracted in May for the first time in seven months in another sign of the weakness of the recovery in the world’s second-largest economy.

“I thought the pace of the Nikkei’s rise recently was faster than expected,” Amari said, according to Dow Jones Newswires. “The weak Chinese data prompted investors to take profits all at the same time.”

The Nikkei index, which closed at its best level in more than five years on Wednesday, had risen in early trade, bucking the decline in New York the previous day.

Selling accelerated when the yen jumped against the dollar in Asia afternoon trade as investors adjusted positions after the recent fast-paced fall in the value of the Japanese currency.

The dollar plunged to 101.63 yen in Tokyo afternoon trade from 103.31 yen in New York late Wednesday.

In London early trade, the dollar fell temporarily below 101 yen.

“The market may be entering an adjustment period after a sharp decline in the yen and a surge in Japanese stocks,” said Daisuke Karakama, a market economist at the forex division of Mizuho Corporate Bank.

“No one believed the yen would keep on falling and stocks would keep on rising. It is not surprising if yen-buying momentum revives at any time.”

Expectations for Prime Minister Shinzo Abe’s pro-spending, pro-growth policies have weakened the yen more than 20 percent against the dollar over the past six months and boosted share prices to their highest level in more than five years.

A strong yen is bad for Japanese exporters as it makes their products less competitive abroad and reduces income when repatriated.

The Dow Jones Industrial Average sank 0.52 percent to 15,307.17 while the dollar picked up Wednesday on Federal Reserve chief Ben Bernanke’s suggestions that the bank could taper off its massive stimulus in the coming months.

Although Bernanke stressed that current economic conditions did not warrant an end to the Fed’s aggressive measures at the moment, he said the Fed could pull back in the next few meetings if they improved.

In Tokyo trade, shares of big-name companies dropped across the board, with Toyota finishing down 5.12 percent at 6,290 yen while Sharp dropped 13.14 percent to 522 yen.

Sony plunged 5.72 percent to 2,159 yen after rising sharply in the past days ahead of its announcement of a midterm business plan Wednesday.

Softbank dropped 7.15 percent to 5,320 yen after the Wall Street Journal reported that it would propose Washington approve a person sitting on Sprint Nextel’s board to oversee issues concerning national security if its planned takeover of the US firm goes through.