Boko Haram: US renews plea to Nigeria on rights abuses 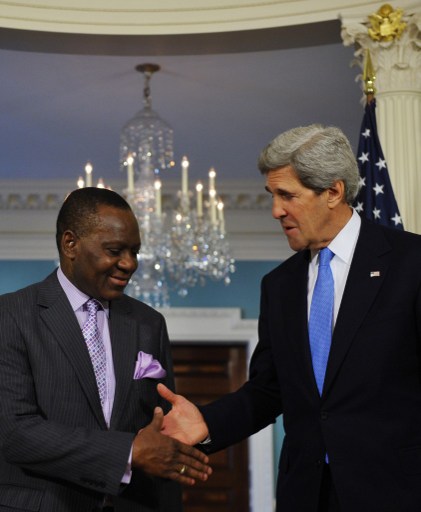 Nigeria's FM Ashiru and US Secretary of State, John Kerry in Washington 25 April

US Secretary of State John Kerry Saturday in Addis Ababa, Ethiopia, renewed a plea to Nigerian authorities to ensure the military does not carry out atrocities against civilians in its clampdown on Islamic militants.

Nigeria declared a state of emergency in three northeastern states on May 14 as it launched a military offensive to end Boko Haram’s four-year insurgency.

“Boko Haram is a terrorist organisation and they have killed wantonly and upset the normal governance of Nigeria in fundamental ways that are unacceptable,” Kerry told reporters on the sidelines of an African Union summit.

“We defend the right completely of the government of Nigeria to defend itself and to fight back against terrorists. That said I have raised the issue of humans rights with the government,” he stressed.

Activists as well as the United States have voiced concerns over the fighting, with Nigeria’s military regularly criticised over its response to the insurgency due to allegations of major abuses.

“We all of us try to hold to the highest standards of behaviour,” Kerry said in a joint press conference with Ethiopian Foreign Minister Tedros Adhanom Ghebreyesus. “One person’s atrocity does not excuse another’s.”

He insisted the authorities should not seek revenge, saying the best way forward was “good governance, it’s ridding yourself of the terrorist organisations so you can establish a standard of law that others can respect.”

A May 7 attack in northern Bama saw insurgents disguised in military uniforms break into a prison and attack several government buildings, leaving 55 people dead. The women and children were around the sites at the moment of the attack and were taken hostage and only finally released on Friday.

The conflict is estimated to have cost 3,600 lives since 2009, including killings by the security services.

Kerry added that “to their credit the government has acknowledged that there have been some problems, they’re working to try to control it.”