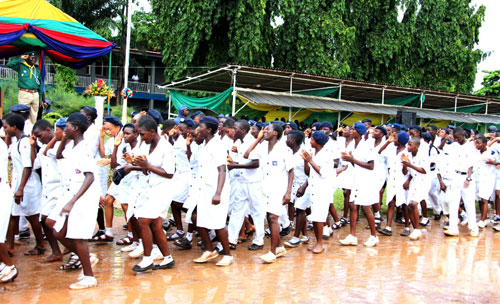 A report by the United Nations has indicated that the provision of meals for school children was still lacking in many developing countries, including Nigeria. The State of School Feeding Worldwide report by World Food Programme (WFP) was made public at the UN Headquarters on Friday.

The report stressed the importance of providing meals for school children, particularly in times of crises.

The UN Correspondent of the News Agency of Nigeria (NAN) reports that the report provides global analysis of school feeding programmes in developed and developing nations.

According to WFP, about 368 million children, about one in five, get a meal at school every day in 169 developing and developed countries. In Nigeria, according to the report, fewer than 500,000 children are being fed in schools. However, countries such as Ghana, Zambia, Lesotho, Egypt, Cape Verde, Morocco, Sudan, Ivory Coast have a better coverage of their children. Lesotho and Cape verde feed their school kids, 100 per cent, the report indicated.cameroon and Nigeria perform very poorly, with Nigeria the worst.

It explained that despite the global nature of school feeding, the coverage of these programmes was lowest where they are most needed. For more on the WFP report, please click this link:http://documents.wfp.org/stellent/groups/public/documents/communications/wfp257482.pdf

“In low-income countries, only 18 per cent receive daily meals at school, compared to nearly 49 per cent of children in middle-income countries. Global investment in these programmes is about $75 billion, with most coming from government budgets.

“While these may seem like a large investment, the benefits are even greater as the report states that for every $1 spent by government and donors, at least three dollars are gained in economic returns,’’ it said.

It stressed in the past five years, at least 38 countries have scaled up their school feeding programmes in response to a crisis, whether related to food prices, conflict, natural disaster or financial volatility.

“School feeding assures that where quality education is available, children are able to take advantage of the opportunity to learn. It is an investment that pays off in the future with better-educated, stronger and healthier adults.

“It is also a critical safety net to prevent the most vulnerable from suffering in times of crisis,” the report quoted the Executive Director of WFP, Ertharin Cousin as saying.

The report also quoted lead author, Carmen Burbano as saying that “during the food and fuel crises in 2008, many governments struggled to protect the most vulnerable from hunger and looked to school meals to achieve that.

“In the current recession, even wealthy nations are examining how school meals can prevent families sliding deeper into poverty and hunger.”

WFP had been operating school meals programmes in developing countries for almost 50 years.

In 2012, the agency provided meals or nutritious snacks in school for 24.7 million children in 63 countries.

This included take-home rations for 1.3 million girls and 500,000 boys, providing an incentive for poor families to keep their children in class.

The UN will celebrate Children’s Day on 27 May.