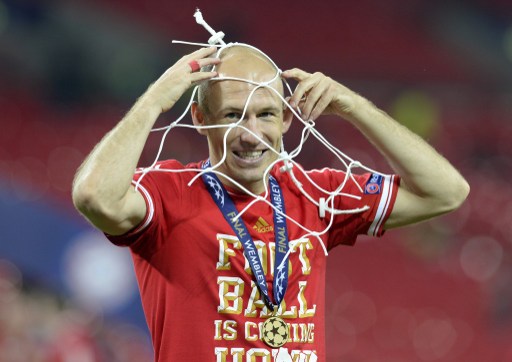 In the past four years, Robben had played in two Champions League finals and one World Cup final, only to finish on the losing side on all three occasions, but was Bayern’s hero at Wembley.

Despite having won league titles in four countries, the Wembley triumph is his first Champions League final win with Bayern at the third attempt as he claimed the man-of-the-match award in London.

He started for Bayern in both the 2010 and 2012 Champions League finals, when his extra-time penalty against Chelsea was infamously saved last season in Munich as the trophy went to Stamford Bridge.

But he made amends at Wembley by setting up Mario Mandzukic for Bayern’s opener on 60 minutes, then broke into the area a minute from time and scuffed home his shot to break Borussia hearts. 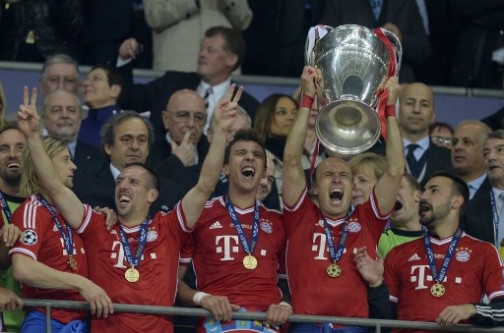 “It was a sense of ‘finally’,” the 29-year-old admitted, having been presented with the man-of-the-match award by former Manchester United manager Alex Ferguson.

“Its unbelievable, I can’t describe what’s going through your mind, there are so many emotions.

“When I got the ball, I was free, I anticipated Franck’s move and the only thought was, I hope he puts the ball in the space I had seen.

“The ball was exactly in my path, first touch took me away from the defender.”

The Wembley winner was redemption for the Dutchman who had spent much of the first-half of the season on Bayern’s bench.

“In the last few weeks, I’ve been very aware of Arjen and I’ve been very conscious about how I train with him, I wanted to make sure he didn’t get injured,” said Bayern coach Jupp Heynckes.

“I’m particularly pleased for him.

“After last year’s defeat in the final, we were all tragic figures, but he made the difference today.

“I spoke to him in training yesterday and said, ‘Arjen, you’re in really good form and tomorrow you’ll be one of the crucial factors.'”

Robben had two chances to score in the first-half at Wembley, the clearest coming when he sprinted clear of the Dortmund defence on 29 minutes, but Dortmund’s Roman Weidenfeller saved his shot.

It was reminiscent of the 2010 World Cup final, when bearing down on goal for Holland in the 60th minute in Johannesburg, he had a chance to engrave his name in Dutch football folklore.

Robben rose to European prominence at PSV Eindhoven before Chelsea won a bidding war with Manchester United to secure his services in a transfer worth £12 million ($18.2 million, 14 million euros).

He won back-to-back Premier League titles under Jose Mourinho before he left Stamford Bridge in August 2007 for Real Madrid.

Robben won the Spanish title in his very first season, but when Kaka and Cristiano Ronaldo arrived at the Bernabeu in a second ‘Galactico’ era, the Dutchman was Bayern-bound in August 2009.

Bayern romped to a league and cup double in his first season as he was voted Germany’s Footballer of the Year.

This season he lost his right-wing berth to Thomas Mueller and were it not for a long-term injury to Toni Kroos, Robben would have probably stayed on the bench at Wembley.

His second-half goal sparked Bayern’s 3-0 win at Barcelona in the semi-final, second-leg, and with his contract due to expire in June 2015, it remains to be seen how he fits into new Bayern coach Pep Guardiola’s plans next season.