Governor Amosun on my mind 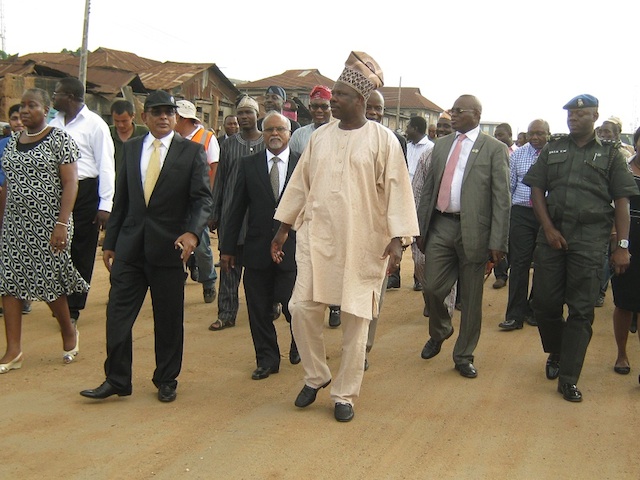 Amosun on an inspection of Itoku Bridge Abeokuta

Many of the 36 state Governors in Nigeria will mark their mid term on 29 May. Some of them will wonder how the time has sped by, without their being able to register or flaunt any achievement in 730 days. Some may still be groping in the dark, planning on what to give back to the people who voted for them, while some will justifiably be proud of what they have achieved in a little time as they look ahead for further consummation of their agenda before the next election.

Ibikunle Amosun, governor of my home state of Ogun falls in the latter category.
I am not usually given to lavishing praises on elected public officials, since we voted for them to serve public interest in the first instance. But I must breach my tradition by commenting on the enormous work that the 55 -year old accountant is accomplishing in my state.

The last time I visited Abeokuta was to witness the commissioning by Amosun of the first flyover bridge in the town. I must confess that I thought then that the bridge was the high-mark of the governor’s two year reign, but I was surprised when I went back several weeks ago and found that he has many other things hidden under his ‘mountain cap’.

The road construction going on or already completed in the capital is unprecedented, in sheer scale and scope. Virtually turning Abeokuta into one huge construction yard, Amosun is building a road to link the NNPC mega station and Abiola Way; expanding Abiola Way, all the way to Muda Lawal Stadium in Asero. He is re-building Akin Olugbade-Totoro road, Itoku-Sapon-Ago –Oka, by knocking down old houses on the way and slicing through rocks. He is turning the road to Onikolobo into an expressway. And on some of these roads, he is building a maze of flyovers and suspension bridges, making a provision for an imminent metro rail, lighting the road for dazzling effects at night, such that by the time all the work is done, Abeokuta will take its pride of place as a modern state capital.

Outside the capital, Amosun’s most ambitious project is the 107km Ilara-ijoun-Eggua-Ilase road in the Yewa bloc of the state, which links four local councils; a road that will shorten greatly the travel time between the councils. Some of the villages that will benefit from the road, I learnt last felt government impact during the Awolowo years. And that was over 60 years ago.

In Sagamu, Amosun has in place a 10-lane bridge at Sabo and the expanded Oba Erinwole-Isale-Oko road.

In Ijebu-Ode, he is erecting a pedestrian bridge at Mobalufon and a flyover at the Lagos garage, in front of Chief Okunowo’s house. His biggest project in the town is the expansion of the road from the expressway, through Mobalufon, -Ejinrin-Road, all the way to Folagbade-Erunwon junction into an eight-lane expressway, four-lanes on each side. That project is now bogged down by dirty politics by the PDP at the centre. Some years ago, the PDP government had awarded a contract for the resurfacing of the road to a Chinese Construction Company. But as it is the bad habit of the central government, it failed to pay for the project. By a coincidence, Amosun awarded the same road to the same company, only for the Federal Government to revive its moribund contract, to stall Amosun’s road project. The Federal Government was said to have paid the Chinese company some small money, some say N100million to start work. Now, the Chinese company has done a little work commensurate with Federal money and work has stopped. So has Amosun’s road project here.

The hiccup here notwithstanding, any indigene of my state who has visited Abeokuta, Sagamu and Ijebu-Ode cannot but notice these accomplishments, whether you like the face of the governor or not or his politics.

The most remarkable is that Governor Amosun appears to be in a hurry. He wants to deliver most of the roads this year and for others he has a completion date of not more than 2014. To achieve this, he is always on the road, almost everyday to inspect the projects and to nudge contractors to deliver on time.

However, the transformation of Abeokuta is the most remarkable of the governor’s achievements. The infrastructural changes he is effecting will completely transform the city such that any ‘Egba Abroad’, who comes on a visit even now, is sure going to miss his way home. I once lived in the city some three decades before and I was amazed by what I saw, during my last visit. The projects are simply very impressive.

To use the cliché in Lagos, ‘Governor Amosun is working’. He is leaving his marks on the state and he deserves our applause to accomplish more. In my view, if the central government has been harping on a transformation agenda, Ogun state under Amosun has given it concrete expression.

When he was sworn in, Governor Amosun had made some controversial promises about what he wanted to do, promising free health and free education, with critics assailing him for being out of tune with Ogun state financial reality. When he came to terms with the reality after perusing the financial books of Gbenga Daniel, the governor stirred other controversies as he made to cut costs. One of the controversies he ran into was his decision to cancel the Tai Solarin University of Education. The Ijebus, a major bloc in the state would not accept that and they mounted some serious resistance.

The school survived and Governor Amosun had since stabilized the finances of the state, raising IGR from N700million to over N4billion in a month. And with this financial boost, Governor Amosun has been able to put his plans for the state into reality.

Governor Amosun is not all about roads and bridges. He is building 20 model secondary schools in the state. He is intervening in agriculture and other areas. And surely he still has a lot to do on health care and education.

But his greatest challenge will be how to transform the many slum towns around Lagos, whose residents taxes have ballooned the state IGR, but who are yet to feel the impact of government. Such places are Akute, Lambe, Magboro, Mowe and Ibafo and others.