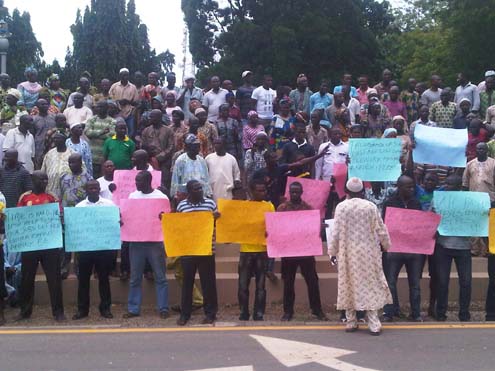 Some of the protesters

Hundreds of businessmen at the Pelewura Market, Adeniji-Adele area of Lagos Island, Lagos, southwest Nigeria, Monday stormed the Lagos State House of Assembly to protest the alleged plans by the State Government to close down the market to pave way for the cable car project being proposed by the government.

The protesters, who sell building materials, said they came on behalf of other traders in the market who now face a bleak future following the planned demolition of the market.

Armed with placards with various inscriptions pleading with the government to rescind its decision, the protesters reminded the government that many of them have dependents and should not be thrown into the labour market.

Legal adviser to the traders, Mr. Azeez Olagoke, alleged that the government had given the traders a seven-day ultimatum to quit the market.

“It came to us as a surprise that we shall be removed from our market place to create space for cable car station being proposed by a private company.

“Removing us from our market without providing alternative market place for us within Lagos Island is like giving death sentence to our members.

“Our members are self-employed. How do we survive if we are removed without being provided with alternative market place?” he asked.

Many of the traders who spoke with P.M.NEWS explained that the planned closure of the market had caused serious confusion among the traders.

In a petition made available to the House of Assembly and signed by Chief Joseph Olawuyi, Chairman, and Bamidele Adeyemi, Secretary of the association, the traders said: “we are appealing to the House to save our market and our lives.

“We all have our children, families and other dependents; how do we take care of them and ourselves without our market?”

Chairman of the House of Assembly Committee on Transport, Commerce and Industry, Bisi Yusuf, urged the traders go back in peace, promising that the House would look into their complaint.