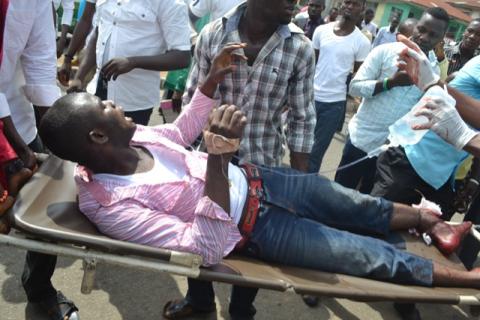 Ahmed Dayo: shot by the police in Ilorin, Monday

Commercial and other social activities were on Monday, 27 May, paralysed in Ilorin, Kwara state capital, following a violent protest by students of the Kwara State Polytechnic.

One of the students was allegedly shot by a police escort attached to one of the leading banks in the area.

The incident which occurred at about 2.10pm threw the entire popular Muritala Mohammed way, Post Office area and other parts of the state capital into confusion as motorists were prevented from moving while bonfire was set on the major roads by the irate students.

According to an eyewitness, Abodunrin John, “Ahmed Dayo of ND 1 in the Department of Accounting, who was shot was inside a cab when the bullion van belonging to the first generation bank which was blaring its siren to clear the way, stopped the taxi and attempted to shoot its tyre.

“Unfortunately, instead of the bullet hitting the tyre, it hit Dayo in the vehicle and damaged one of his legs.”

Further checks revealed that the policemen inside the bullion van did not make any attempt to take the student for medical treatment as they zoomed off to avoid being attacked by other students.

The victim was immediately taken to a nearby private hospital, Ayodele Medical Centre, where he was only given first aid treatment before he was  referred to the University of Ilorin Teaching Hospital.

Kwara state Commissioner of Police, Agboola Glover-Oshodi, said “we are trying to calm the situation,” adding that the police suspect has been arrested.

He assured that the law would take its course.

When contacted, the police spokesperson in the state, DSP Fabode Olufemi, said he was yet to receive any report on the incident, adding that the police would swing into action as soon as  he was informed about the incident.