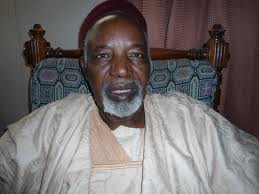 The National Chairman of the de-registered Peoples Redemption Party (PRP), Alhaji Balarabe Musa, on Tuesday said that the suspension of Gov. Chibuike Amaechi of Rivers was as a result of cumulative actions.

He told News Agency of Nigeria (NAN) in Abuja that there was more to the suspension than what the PDP made the general public to believe.

He said that the suspension carried more malice than just winning an election at the just concluded Nigerian Governors Forum (NGF).

Balarabe said that the PDP with their action was sending a dangerous signal to the Nation towards the 2015 elections and it must be checked.

“The suspension of Amaechi was a desperate action. I am not talking as an opposition, but as a politician with greater interest in the democratic dispensation of the country.

He said that because of the political future of Nigeria, every politician must see the action as a warning signal which must not be handled with sentiments.

“PDP has a big problem and as a ruling party, they have to show good example, rather than heating up the system all the time,”.

Balarabe said that the conception of NGF was a good idea if their ideals were well exercised without external interference.

He said that during the second republic, there was a similar forum named, “The Progressive Governors Forum”.

Balarabe said that the progress forum was partisan then because it only took care of the progressive parties.

“But, NGF was based on the national interest as it comprised all the governors irrespective of their political parties.

He said that the PDP should not interfere in the affairs of the forum because it was not a PDP forum or affiliate.

He said that the forum should be independent of any political party for it to survive.