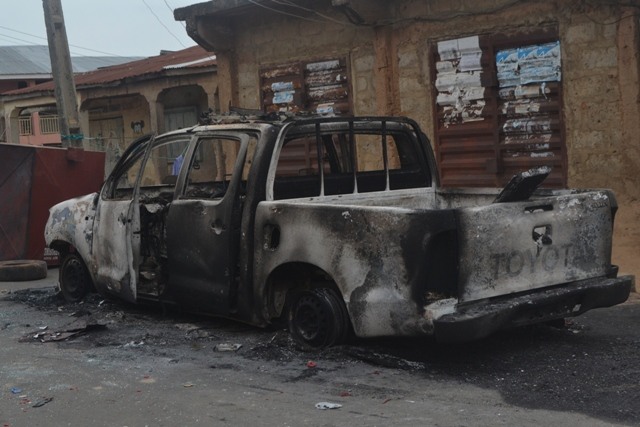 Students of Kwara State Polytechnic, Ilorin, northcentral Nigeria, went on the rampage again Tuesday following the shooting of one of their colleagues, Ahmed Dayo, by a policeman escorting a bullion van belonging to one of the first generation banks on Monday.

While Dayo is receiving treatment at the University of Ilorin Teaching Hospital, the students took to the streets Tuesday and burn the escort van attached to the state Governor Abdulfatah Ahmed, while the school has been shut indefinitely.

The governor was on his way to the venue of a road project within Ilorin metropolis which he was to commission when the van was set ablaze by the irate students. The governor had to cancel the commissioning of the project.

The violent protest may scuttle plans to mark Wednesday’s Democracy Day, which also marks the second anniversary of Governor Ahmed in office.

P.M.NEWS correspondent who also witnessed the incident gathered that activities in most parts of Ilorin metropolis were paralyzed again today as the students completely took over the major roads.

At the venue of the road project commissioning in Kulende area, Royal Valley Estate, Ilorin, people in their thousands waiting for the governor to arrive  took to their heels on hearing that the governor’s escort vehicle had been set ablaze.

Some of the people interviewed by our correspondent said that they may not attend the Democracy Day celebration even if it holds due to the break down of law and order.

The state government promptly announced the closure of the polytechnic indefinitely. This was contained in a statement signed by the Commissioner for Tertiary Education in the state, Alhaji Aliyu Laade.

He said the closure was to ensure the restoration of law and order in the state and curb further destruction by the students.

The spokesperson of the state Police Command, DSP Olufemi Fabode, has appealed to the aggrieved students not to take laws into their hands, stressing that the cop who pulled the trigger has been arrested and is currently in police custody.