Fashola: Lekki-Ikoyi bridge will be tolled 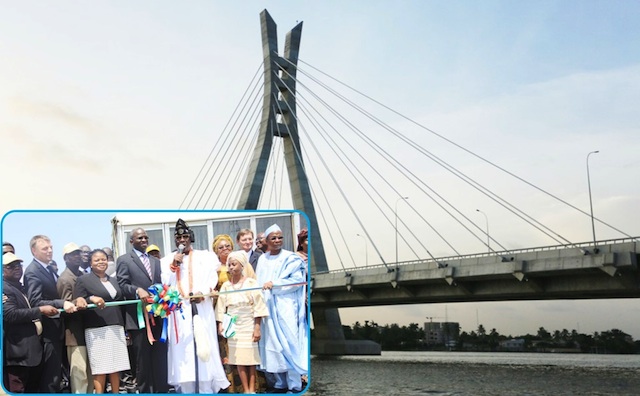 Governor Babatunde Fashola of Lagos State today commissioned the Lekki-Ikoyi link Bridge built at a cost of N29 billion. The bridge is the first suspension bridge in Africa.

The bridge was planned and designed by Julius Berger engineers in Germany and Nigeria, with additional technical support from Engineering and Service Group Bilfinger.

Witnessing the commissioning of the bridge are the first Governor of Lagos State, Brigadier-General Mobolaji Johnson (Rtd); first civilian governor of Lagos, Alhaji Lateef Jakande; Oba of Lagos, Rilwan Akiolu; former Secretary to the Government of the Federation, Yayale Ahmed, among others.

Fashola announced that the bridge would be tolled and reeled out the cost per vehicles, saying that salon cars would pay N250; mini-vans, SUVs and light pick-up trucks, N300; non-commercial buses with maximum seating capacity of 26 persons, N400 and motorcycles, with 200cc capacity and above, N100.

“In addition, there is restriction on certain types of vehicles. For the avoidance of doubt, the following types of vehicles are prohibited from using this bridge, namely: commercial motorcycles, tricycles, commercial buses, including danfos and high capacity buses and heavy duty trucks, articulated trucks, lorries and such other categories,” he explained.

The governor said in order to ensure that the full savings in journey time was experienced by commuters, the government is racing to conclude the reconstruction of Glover Road later in the year to provide another choice of access to commuters who chose to use the bridge, adding that the bridge would fully be opened for use from 1 June, 2013.

Fashola said he expected that from now on, residents of Lekki who had no business in Victoria Island, would not need to go on to Ozumba Mbadiwe in order to cross to the Mainland, saying that “in the event they do, it will not be because they have no alternatives, it will be because they made a choice.

“In the future, we intend to complete the road from the 3rd roundabout through Admiralty Way to provide a choice and access to commuters from Ajah who are heading to the Mainland.”

The governor dispelled the thinking that the state was being hampered by a court action, in opening the bridge which, which he said was initiated for political reasons.

“No court action or order has prevented us from opening this bridge and we are vigorously defending the court action that was initiated against this bridge. I am convinced that the judicial arm of government remains alive to its developmental responsibilities.

“While we cannot prevent people from initiating all sorts of actions, I believe that our courts will appropriately use their powers to protect the majority of citizens from the reprobate conduct of a few mischief makers and their professional advisers,” he said.

Commissioner for Works and Infrastructure, Dr. Kadri Hamzat said the bridge, which was conceived in 2008 represented a palpable solution to the bottleneck that characterised the Ikoyi to Lekki/Victoria Island axis of the state, stressing that the volume of traffic on the axis was higher than the capacity of available roads.

“The axis is reputed to be the fastest growing real estate corridor in Africa. It records tremendous growth in the number of people residing or working along the corridor. This led to the need to create an alternative route. Our choice is this new cable-stayed link bridge; the first of its kind in West Africa.

“It has been designed to service and provide access road around the Elegushi Roundabout and Lekki Phase I. The aesthetically savvy bridge provides the standard mega city compliant facility and serves as a strategic by-pass along the Falomo Bridge and Alfred Rewane, Independence Bridge and Ahmadu Bello Way,” he said.