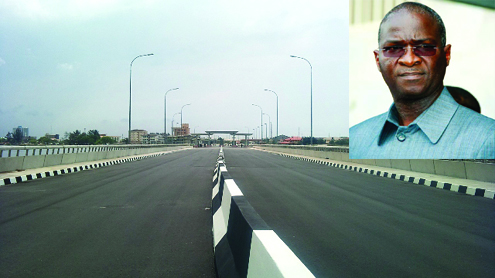 Lawmakers of the Lagos House of Assembly have deferred a decision on the tolling of the new Lekki-Ikoyi bridge opened by the Lagos State Governor, Mr. Babatunde Fashola, amidst fanfare today.

The lawmakers, except the Speaker, Adeyemi Ikuforiji, and Sikiru Oshinowo, all rejected the proposal which was brought to the House by the State Government on the basis that the one-kilometer bridge was built with tax-payers fund and not on a public private partnership deal.

The government had sought the approval of the lawmakers on initial maximum tolls of N250 for saloon cars; N300 for mini vans, Sport Utility Vehicles (SUVs) and light pick-up trucks; N400 for non-commercial buses with a maximum sitting capacity of 26 persons; N100 for motorcycles with 200 cc engine capacity and above.

But the lawmakers wondered how the residents of the State would feel to understand that they would pay for using the same bridge built with their money.

Attempts by Ikuforiji to convince the members on the importance of the proposal and how beneficial it would be to the State was rebuffed.

The drama began when the Leader of the House, Dr. Ajibayo Adeyeye, moved the motion on the ‘Concession Agreement for Electronic Tolling System (ETS) of the Lekki-Ikoyi Toll Bridge.’

Adeyeye had stated while presenting the motion that pursuant to the Lagos State Public Private Partnership Law, 2011, “this House do resolve to approve the request for the Ratification of the Electronic Tolling System Operations and Maintenance; Concession Terms and Conditions for the Lekki-Ikoyi Bridge and Approval of the Fare Regime, as forwarded by Attorney-General / Commissioner for Justice, Lagos State.”

The motion was immediately seconded by Sultan Adeniji-Adele and Speaker Adeyemi Ikuforiji was about to approve it, when the Deputy Speaker, Taiwo Kolawole argued that the opinions of members on the motion must count before any approval by the Speaker.

Explaining later, the content of the motion, Dr. Adeyeye explained that a company, the Lagos Tolling Company, had been solely registered by two other foreign companies for the purpose of collecting tolls on the bridge.

He said the agreement between the State Government agreement with the company was for the company to manage the tolling for 10 years and that this is renewable by another five years.

He said the companies were bringing into the tolling system modern equipment to make the job easy.

In their reactions, the lawmakers reminded the Speaker that the House had agreed to pend deliberations on the document containing the proposal until they digested it. They also said it was not the best for residents of the State to pay for using the road.

Representative of Epe Constituency 2 at the House, Segun Olulade, while raising objection, said some things in the proposal were not clear.

“We should put away the tolling for now as this would not affect the commissioning of the project,” he said.

Contributing, the member representing Alimosho Constituency 1, Bisi Yusuf, said: “if you look at the volume of the document, you will discover that it needs a thorough and analytical mind to analyse it.

“The project was started either two or four years ago and you are bringing the document for urgent consideration and approval, it is not the best. It needs time for examination, so a time frame should be given.”

While Rotimi Olowo, another member of the House, urged that officials of the government be invited to give details of the proposal, his colleague, Saka Fafunmi representing Ifako-Ijaiye 1 Constituency, said he was not convinced on why tolling should be allowed on the bridge.

Fafunmi queried: “I know it was part of Lagos State fund that was used to build the project. Must we always make the people pay for every service we provide?”
In his own argument, Deputy Speaker of the House, Taiwo Kolawole, said he was not supporting the plan for tolling on the bridge.

He also tasked his colleagues to be mindful of posterity and what people would say about them when they leave the House as members.

He noted that the proposal was not in line with the 2011 Public-Private Partnership law of the State.

“This is not about provision of infrastructure because the bridge has already been constructed using the tax payers’ money. So, why should we still toll a bridge that we have built with our money?

“Again, this proposal is coming too late. Our approval should have been sought before the construction of tolling system or the bridge itself.

“They simply built it in anticipation that we will just approve it. For me, I don’t want to be part of this. They have answered the question by building the toll point before coming to this House.

“In deciding this, we must look at the future and what happens when we are no longer on the floor of the Assembly,” Kolawole said.

Ikuforiji, who picked holes in all their arguments, further blamed the lawmakers for refusing to raise questions concerning tolling when they passed the budget for the project.

Ikuforiji also compared the tolling of the bridge with what is currently going on at the Lekki-Epe Expressway.

However, many of the lawmakers countered the Speaker on this reminding him that they only worked with the information the executive arm provided them during the period.

According to Moshood Oshun, at the time the proposal was brought, the members were given the impression that it was one of the infrastructural projects to be executed by the State Government without consequence on the people.

Oshun was supported by Ipoola Omisore and Kolawole Taiwo, Bashir Oloto and Razak Balogun who also asked the Speaker not to blame the House for not looking into the issue of tolling earlier.

Bisi Yusuf maintained that, “if the people give you money to build a bridge, they should have the privilege to enjoy it.

After the hot deliberation, the House then decided to step the proposal down for another day. They also suspended the proposed commencement of tolling on the bridge pending their resolution on the issue.

The members had stepped down discussions on the proposal on Monday when the letter was brought from the office of the State Attorney General and Commissioner for Justice, Ade Ipaye, seeking the ratification of the electronic tolling system operation, maintenance, concession terms and conditions for the Lekki-Ikoyi toll bridge.

Julius Berger Nigeria Plc began the construction of the bridge in October, 2008. The total length of the main bridge is 466m. The length of Cable Bridge is 170m (the suspended section), the height of Pyron is 87m from water level navigational requirement while the clearance average 9m above high water level.

According to a brief from the Ministry of Works and Infrastructure, the challenges encountered were at the two landing points at Lekki and Ikoyi ends, but negotiations with the affected land owners at Lekki end yielded early resolution which allowed the contractor to commence construction works in October, 2008.

The bridge will not be Sub-saharan Africa’s first suspension bridge. But it appears to be the longest.

The South Africans hold the record, with more than six suspension bridges, according to Kwintessential.co.uk.