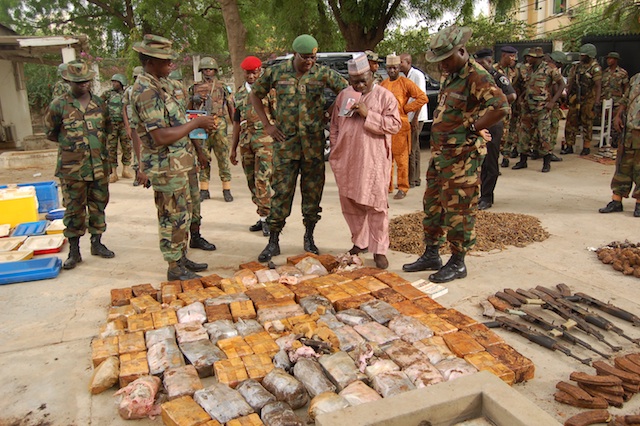 Three Lebanese have confessed to Nigerian security authorities in the northwest state of Kano over their involvement in hoarding smuggled arms and ammunition in a bunker located on Gaya Road, Bompai axis of the ancient city of Kano for acts of terrorism.

Abdallah Hassan Fadallah, Mustapher Fawaz and Abdullahi Tahini told security chiefs that they are members of the Hezbollah terrorist group dispatched to Nigeria to fight against Isreali and Western interests.

They have been transferred to Abuja for further investigation.

A special team of the Joint Task Force in Kano discovered a bunker built inside a bungalow where an assortment of arms and ammunition were stuffed for terror activities.

Security chiefs said the bungalow had been under surveillance while the movements of the suspects were being closely monitored.

The weapons were concealed inside coolers made for cooked food.

Speaking to newsmen at the raided Bungalow, Commander, 3 Brigade of the Nigerian Army headquartered in Kano, Brigadier-General Ilyasu Abbah recalled that one of the suspects, Tahini, an Abuja-based business man, was once arrested at the Mallam Aminu Kano International Airport, MAKIA, over undeclared 60,000 US Dollars on his way to Lebanon.

Brigadier-General Abbah noted that the suspects confessed during preliminary investigations that they were instructed by the Lebanese-based Hezbollah terrorist network to use the weapons to fight against the interest of Isreal and the West, pointing out that, “even if they were meant to fight Israeli and Western interest in the country as they claimed, are Nigerians not working in those organizations.”

Adding his voice to the startling discovery, Bassey Etang, Director of State Security Service in Kano said, “we cannot say how long the weapons have been in the bunker, the rust you is as a result of the conditions they have been exposed to, but are still serviceable, again we cannot link them with Boko Haram, until the conclusion of investigation, but we suspect such group like Hezbollah can have links with Boko Haram.”

In an e-mailed statement from 3 Brigade headquarters and signed by the Public Relations Officer, Captain Ikedichi Iweha, the military narrated how the operation was carried out: “On 28 May 13 a combined team of the JTF involving the NA of the 3 Brigade here in Kano and the Kano state DSS conducted a thorough search of this house located at No 3 Gaya Road off Bompai Road Kano belonging to one Abdul Hassan Taher Fadlalla, a Lebanese national who is currently out of the country.

“After painstaking search of the whole premises, the search team uncovered an underground bunker in the the master bed room where a large quantity of assorted weapons of different types and caliber were recovered.

“The bunker was specially constructed for this purpose. It is worth mentioning to say that the weapons include anti tank weapons, rocket propelled guns, anti tank/anti personnel mines among other dangerous weapons. All the weapons and ammunition recovered were properly concealed with several layers of concrete and placed in coolers, drums and bags neatly wrapped.

“These discoveries were not accidental but the outcome of an ongoing robust counter terrorism investigation by the Department of the State Services Abuja in the past several months. The investigation also confirms the existence of a Hizbullah Foreign Terrorist Cell in Nigeria. Consequently, the DSS on 16 May 2013 arrested one Mustapha Fawaz the co-owner of the popular Amigo Supermarket as well as the wonderland Amusement Park all in Abuja.

“Thus, his arrest and confession unveiled other members of the foreign terrorists network which led to the interception of one member of the syndicate named Abdullah Tahini a Lebanese national at the Mallam Aminu Kano International Airport with undeclared amount of sixty thousand United States Dollars on him enroute Beirut. Thereafter on 26 May 2013 one Talal Roda also a Lebanese with Nigerian Passport was arrested in this same house.

“All those arrested have confessed to have undergone Hizbullah Terrorist Training and further implicated one Fauzi Fawad, also a co-owner of Amigo Supermarket and wonderland Amusement Park. However, the fellow is now at large. The arms and ammunition were targeted at facilities of Israel and Western interest in Nigeria; however, the security agencies are making frantic efforts to unveil the true situation. At the end of investigation, all those involved will be prosecuted.”