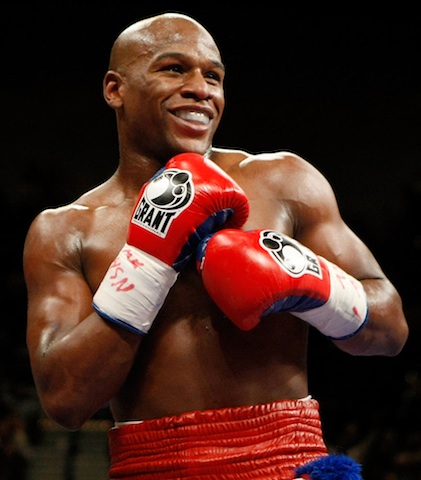 World welterweight champion Floyd Mayweather will put his undefeated record on the line when he fights Mexican champ Saul “Canelo” Alvarez on September 14 in Las Vegas.

“I chose my opponent for September 14th and it’s Canelo Alvarez,” the 36-year-old Mayweather tweeted Wednesday night. “I’m giving the fans what they want.”

Mayweather fought May 4 and remained unbeaten with a unanimous decision over Robert Guerrero to keep his World Boxing Council welterweight belt.

Alvarez posted a 12-round unanimous decision over Austin Trout on April 20 to unify those titles.

Mayweather is moving up in weight to face light welterweight boxer Alvarez, who is 14 years younger than the veteran American.

Manny Pacquiao has been trying for several years to get Mayweather into the ring but the Filipino and Mayweather’s feisty camp couldn’t come to an agreement on how to split the revenue from what would be one of the biggest fights in boxing history.

So Alvarez (42-0-1, 30 KOs) is a bigger, more powerful and younger opponent for Mayweather who is coming off a win over hand-picked opponent Guerrero.

“I will be the first to beat Floyd,” Alvarez tweeted.