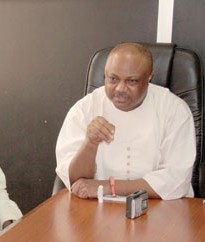 A former governorship aspirant in Nigeria’s Delta state, Great Ogboru, on Thursday filed an application for a stay of contempt proceedings before a Federal High Court, Lagos, pending his appeal.

Ogboru filed the application through his counsel, Mr McCarthy Mbadugha, following a contempt proceeding against him by the Assets Management Corporation of Nigeria (AMCON), for flouting an order of court.

He sought for stay of proceedings pending an appeal challenging the jurisdiction of the court to hear the suit.

Counsel to AMCON Mr Kunle Ogunba (SAN), however, raised an objection to the application, arguing that the notice of appeal was not properly filed and served.

He argued that there was no evidence of proper filing before the court, and that it was also not duly certified.

Ogunba, therefore, urged the court to refuse the application for stay, describing it as being unwarranted.

Justice Okon Abang, in his ruling,however, held that the notice of appeal was duly filed by the applicant, adding that he would fix a date for ruling on the application for stay.

The judge adjourned the case to June 10 for ruling.

The News Agency of Nigeria (NAN) recalls that AMCON had filed the contempt charge against Ogboru for flouting the subsisting order of Abang.

The order made on Jan. 13, had appointed a Receiver Manager for Fiogret Nig. Ltd, the defendant’s company.

The company is subject of a legal action related to a loan transaction between the defendant and Equatorial Trust Bank (now Sterling Bank).

Ogunba had argued that the defendant used the company as collateral to secure a loan of N33 million from the bank, for the importation of fish.

He said that the defendant had been unwilling to liquidate the debt, despite repeated letters of demand, which led AMCON to take over the company.

AMCON then filed an application before the court in January, seeking to appoint its counsel, Ogunba, as Receiver Manager of the acquired company.

NAN also recalls that Abang had then made the order, appointing Ogunba as Receiver Manager to the property.

AMCON, in the contempt charge, alleged that after Ogunba had taken possession of the assets, the defendant and officers of his company employed thugs to invade the premises and they carted away several truck-loads of fish.

In a supporting affidavit, AMCON also alleged that Ogboru also threatened to deal with the receiver/manager for executing the court’s orders.

AMCON, therefore, sought the court’s declaration that the act of thuggery and hooliganism by the defendant was a contempt of court.