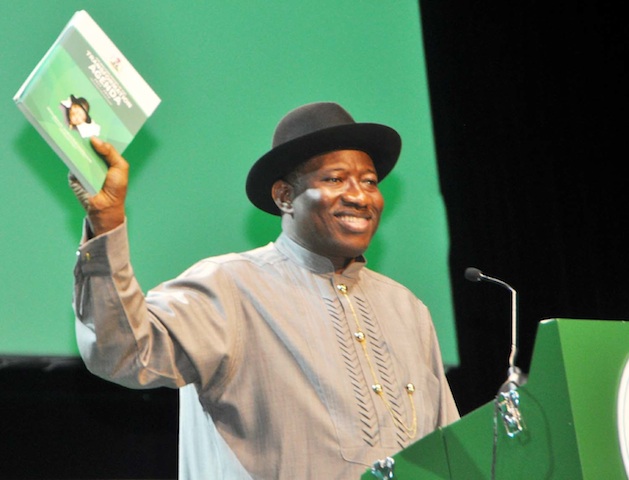 President Goodluck Jonathan on Wednesday presented the mid-term report of his four-year agenda, with a call on critics of his administration to be objective.

Jonathan made the presentation on the occasion of the 2013 Democracy Day celebration held at the International Conference Centre, Abuja. He specifically condemned some sections of the media, which he said had rated the performance of his ministers, low without making open the criteria used in the assessment.

Jonathan called on Nigerians to use the 234-page document containing the mid-term report of the performance of his administration in assessing his government.

“As a teacher, I know that for you to mark a student’s work, you must have a marking scheme, because assessment can be very subjective.’’

Jonathan said the newspaper rated the ministries of Trade and Investments and National Planning, which performed creditably well, average.

The president also noted that in spite of “our security challenges’’, many businessmen were interested in coming to do business with Nigeria.

He said the Ministry of Trade and Investments, which was `a dead end’, `is now very active’’, while Shamsudeen Usman has brought life to the Ministry of National Planning.

“But these two ministries were scored average, and I asked what the criteria are.’’

Jonathan, therefore, pleaded with those who want to assess and write about his mid-term scorecard, to develop a criterion because “without a marking scheme you cannot mark anybody’s paper’’.

Earlier in a presentation, the Minister of Finance, Dr Ngozi Okonjo-Iweala, had said that in spite of challenges of inequality and inclusion, “the nation’s economy is waxing strong’’.
She said that the GDP had recorded significant growth, with the dollar exchange rate remaining stable at between N155 and N160.

Okonjo-Iweala, who is also the coordinating minister, said the ECA had been of help in improving the economy since oil production fell from the projected 2.53 million bpd to between 2.1 million bpd and 2.2 million bpd.

The minister said that there were deliberate government policies to reduce recurrent expenditure and complete unfinished capital projects.

She said the administration’s waiver and tariff policies had also changed positively, with government focusing on sectoral waivers such as agriculture, power, aircraft spare parts, solid minerals at zero duty.

“Trade has improved and exports are up in plastics and rubber, vegetable products, prepared food stuff and beverages,’’ she said.

She said that with over 7 billion dollar foreign direct investment in 2012, Nigeria had become the highest investment destination in Africa.