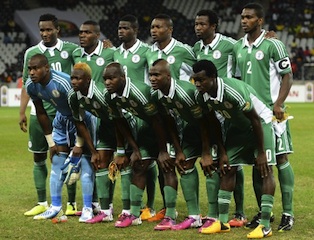 The injury-ravaged Super Eagles will play six matches within 24 days on three continents, and a further two if they reach the knockout stage of the World Cup dress-rehearsal.

Chelsea midfielder Victor Moses, a revelation when Nigeria won the Africa Cup of Nations in Soweto last February, is among those sidelined.

Scotland-based midfield enforcer Gabriel Reuben and Turkey-based midfielder-cum-striker Kalu Uche are other stars coach Stephen Keshi could not call up.

Keshi prepared to tackle Mexico with a training camp in Germany for foreign-based professionals and Nigerian Premier League stars.

Among the home-based footballers was Sunday Mba, the then Warri Wolves midfielder who sprang to prominence at the three-week Cup of Nations tournament.

Mba scored the winner in a shock quarter-finals triumph over pre-competition favourites Ivory Coast and the only goal of the final against surprise qualifiers Burkina Faso.

After facing Mexico — a team hoping to halt a run of five consecutive draws — Nigeria head back over the Atlantic Ocean for a World Cup qualifier in Kenya.

A week after the June 5 Nairobi match, the Super Eagles will be on the other side of Africa in Windhoek for another World Cup Group F fixture against Namibia.

Then comes the Confederations Cup, the traditional, eight-team dress-rehearsal staged by the World Cup hosts one year before the main event.

Nigeria face Tahiti, Uruguay and reigning World Cup and Euro champions Spain within seven days at three venues with the top two progressing to the semi-finals.

Should the Eagles make the final four, they would play an additional two fixtures, increasing the total to eight in 31 days during the ‘close season’ for much of the squad.

South African Kagisho Dikgacoi, whose club Crystal Palace were promoted to the English Premier League this week, has been sidelined by a calf injury sustained in the play-off win over Watford.

It rules the midfielder out of a friendly in neighbouring Lesotho Sunday and away World Cup qualifiers against the Central African Republic and shock group pacesetters Ethiopia.

Rostov-based centre-back Xulu is the only South African playing in the Russian Premier League while left-back Nunes lines up with leading Slovak outfit Zilina.

Cameroon, a country trying to rise from the doldrums after World Cup and Africa Cup embarrassments, visit Kiev for a game against Euro 2012 co-hosts Ukraine.

The side has not lived up to its ‘Indomitable Lions’ nickname in recent years, being the first country eliminated from the 2010 World Cup in South Africa.

Even greater humiliation followed as the Lions failed to even qualify for the 2012 or 2013 Cup of Nations, a tournament they have won four times.

German Volker Finke, who has never coached in Africa, is the latest appointee to the hot seat, getting the nod ahead of former France boss Raymond Domenech.

The selection of Finke, 65, comes after caretaker coach Jean-Paul Akono discovered he was no longer required after listening to a national radio news bulletin.

Cameroon, who lead Libya by one point in a World Cup qualifying group, are away to unpredictable Togo and underperforming Democratic Republic of Congo during June.

Other weekend friendly fixtures include DR Congo against Guinea in south-east France, Libya against Uganda in Tripoli and Algeria against Burkina Faso in Blida.

Sudan and Tanzania meet in Ethiopian capital Addis Ababa and record seven-time African champions Egypt have a June 4 date with Botswana in Cairo.