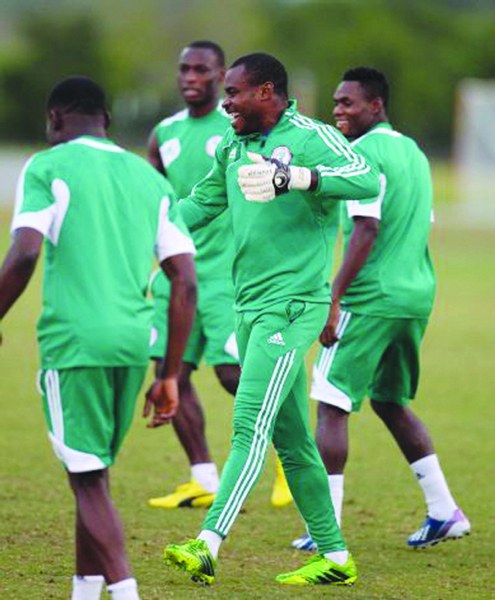 Some Eagles in training

Reigning African champions, Super Eagles of Nigeria and their CONCACAF counterparts, Mexico, will Saturday morning at Houston’s Reliant Stadium, USA test their might in an international friendly match.

The CONCACAF champions would seek to end a streak of five consecutive draws when they face the Nigerians. Mexico, led by their soccer tactician, Jose Manuel have not won any match since they defeated El Salvador 2-0 in October and with three World Cup qualifiers coming up in June, they need to find some winning form against Nigerians, who also have two World Cup qualifiers lined up.

Mexico have claimed just three points from as many matches in the final round of CONCACAF’s qualification system for the 2014 World Cup in Brazil and sit fifth out of six countries, in danger of missing out in next year’s Mundial .

In their past four international games, Mexico have been held scoreless three times and their head coach, De La Torre, must find a solution in front of goal against Nigeria.

In Africa’s World Cup qualifying, Nigeria sit top of Group F ahead of Malawi, Namibia and Kenya and will be hoping their friendly against Mexico can set them up for two qualifiers in June and the Confederations Cup.