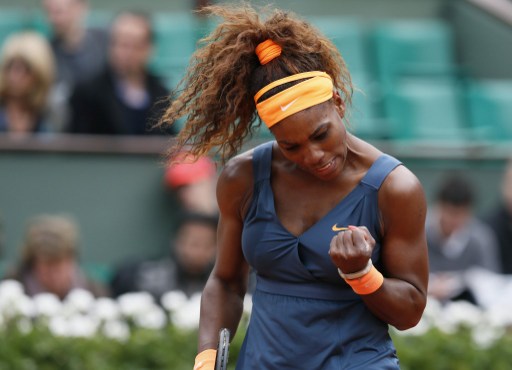 Serena Williams and Maria Sharapova stayed firmly on course for a French Open final showdown by scoring one-sided wins in their ties on Friday.

The two superstars of the women’s game have been duelling for the world number one spot for the last year along with Victoria Azarenka, and their rivalry is currently the biggest draw in the women’s game.

Neither was untroubled on Friday as the rain that had bedevilled Thursday’s play let up to be replaced by cold, blustery conditions that had players draping towels around their shoulders at the changeovers and spectators wrapping up in coats and scarves.

Defending champion and second seed Sharapova was first up, needing only four games and a handful of minutes to finish off her second round tie 6-2, 6-4 against Canadian teenager Eugenie Bouchard

The match had been suspended late Thursday when the rain came down again with the Russian second seed up a set and 4-2.

It was a lesson in big-time tennis for the promising 19-year-old from Quebec, who won the Wimbledon girls singles title last year and who was playing in her first Grand Slam tournament.

Sharapova, a teenage tennis sensation herself when she won the 2004 Wimbledon title at the age of 17, will go on to play China’s Zheng Jie who eased past Melanie Oudin of the United States 6-3, 6-1.

She is now on a nine-match winning streak at Roland Garros having completed her collection of Grand Slam titles in Paris last year, the seventh woman in the Open era to achieve that feat.

“It was a pretty long day yesterday. Left here pretty late and then had an early morning,” Sharapova said.

“But, we all know what to expect. We all kind of knew the weather wasn’t going to be really good yesterday.

“I was happy to play part of the match and obviously get myself in a good position to come out today and finish the match.”

Top-seeded Williams, playing in the opening match of the third round, needed just 61 minutes to dispose of Romania’s Sorana Cirstea 6-0, 6-2 and she has now lost just six games in three one-sided matches.

Cirstea, the 26th seed, who reached the quarter-finals in Paris in 2009, was facing an embarrassing whitewash after losing the first set 6-0 in just 23 minutes.

But she rallied briefly at the start of the second set and even had two break points to lead 3-2.

She failed to take either of these though and Williams simply stepped on the accelerator again to race away an end the remaining pockets of resistance from the Romanian.

The win was the 27th in a row for Williams — the best unbeaten run of her career — and it took her into a fourth round match against the winner of the tie between Roberta Vinci of Italy and Petra Cetkovska of the Czech Republic.

Williams is seeking the 16th Grand Slam title of her career, but just the second in Paris where she last won in 2002.

Williams reached the semi-finals at Roland Garros the following year and since then has fallen four times at the quarter-final stage, but last year she was upset in the first round by Frenchwoman Virginie Razzano.

In other second round matches held over from Thursday, French number one Marion Bartoli battled into the third round with another hard-fought 7-6, (7/5), 7-5 win over Colombian qualifier Mariana Duque-Marino and has now spent over five hours on court in just two matches.

She was further disturbed by being given a warning for seeking coaching from her father Walter, an ever-present at all the former Wimbledon finalist’s matches.