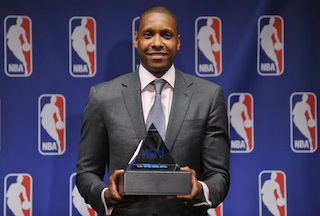 Masai Ujiri, a Nigerian and the first African-born general manager in the NBA, has signed a deal to leave the Denver Nuggets and join the Toronto Raptors in the same position.

Ujiri was named NBA Executive of the Year after helping assemble a Nuggets squad that won 57 games last season and finished third in the Western Conference. Denver lost to Golden State in the first round of the NBA playoffs.

“We feel very lucky to have Masai in our organization,” said Tim Leiweke, president of the Raptors ownership group. “He is a proven judge of talent and we look for him to be a big part of creating a winning atmosphere, leading us to the playoffs and, ultimately, delivering NBA championships for Toronto.”

The 42-year-old native of Nigeria became the first African-born NBA general manager when the Nuggets gave him the job in 2010. He helped revive the club after Carmelo Anthony was traded from Denver to New York and played a role in a four-team deal last year that sent Dwight Howard to the Los Angeles Lakers.

Ujiri served as assistant general manager of the Raptors from 2008-2010 after a year as their global scouting director. He replaces team president Bryan Colangelo, his former boss who was stripped of his general manager duties last month after the Raptors went 34-48 this past season.

“To work in an organization that has committed all the resources necessary to win championships was a huge factor in the decision,” Ujiri said.

“I can’t wait to get back to Canada to build a team that is poised to take the next step in the NBA.”

Ujiri, however, has some work to do — the Raptors have suffered five losing seasons in a row and last reached the playoffs in 2008.