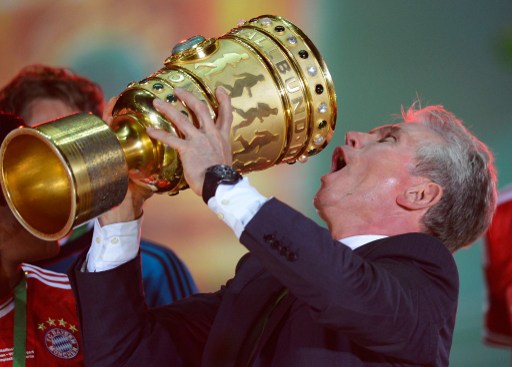 Bayern Munich's head coach Jupp Heynckes celebrates with the trophy after they won the final football match of the German Cup . AFP

Having claimed their fifth European crown in Wembley last Saturday and won the Bundesliga with a record tally of 91 points, Bayern completed the set with their 16th German Cup title.

The Bavarian giants won the European Cup in three straight seasons in the 1970s, but coach Jupp Heynckes ended his two-year tenure in charge of the most successful Bayern side of all time.

Striker Mario Gomez, who made a rare start ahead of Mario Mandzukic, hit two after the break to add to Thomas Mueller’s first-half penalty as Bayern cruised to a 3-0 lead.

But a bullet header on 71 minutes, then a well-placed shot, both from Austria’s Martin Harnik, 10 minutes from time, ensured a nervous finale as Bayern weathered Stuttgart’s late onslaught.

But Bayern were not to be denied their 45th win from 53 matches in all competitions this season.

Ex-Barcelona boss Pep Guardiola will replace Heynckes as Bayern head coach on June 26, but after just three defeats and 11 league points dropped all season, it is hard to see where he can improve.

After the exertions of their Wembley triumph seven days before, Bayern failed to take control early on at Berlin’s Olympic Stadium in front of 75,000 fans as both sides had their chances.

Stuttgart’s Harnik then first headed at Neuer, and Georg Niedermeier failed to prod the ball home at the back post after lightening reactions from Bayern’s off-balance Manuel Neuer on 22 minutes.

Bayern had a clear penalty turned down when Stuttgart captain Serdar Tasci tackled Robben before the ball, but referee Manuel Grafe waved away Bayern’s protests on 32 minutes.

Grafe pointed straight to the spot four minutes later when Guinea’s Ibrahima Troare brought down Philipp Lahm as the Bayern captain sprinted into the area on the right.

Mueller drilled his penalty into the bottom left corner with 37 minutes gone.

It could have been more as Gomez squandered two clear chances as the break approached when his shot cannoned off Stuttgart goalkeeper Sven Ulreich’s leg, then he fired over the bar as it stayed 1-0 at half-time.

But Gomez made no mistake on 48 minutes when Lahm’s cross gifted him a simple close-range tap-in.

The Germany star then added a third and his second on 61 minutes when Mueller fired in from the right and the ex-Stuttgart forward tapped his shot past Ulreich on 61 minutes.

Stuttgart were unlucky not to be awarded a penalty when Vedad Ibisevic’s shot deflected off Jerome Boateng’s hand on 79 minutes.

But Harnik slotted home his second moments later, but Bayern held on for their third title.

With the victory, Bayern Munich goes into the history books as the first Bundesliga club to win the treble of European Cup, domestic league and domestic cup titles in the same season.

Here are the seven European clubs to have achieved the feat: