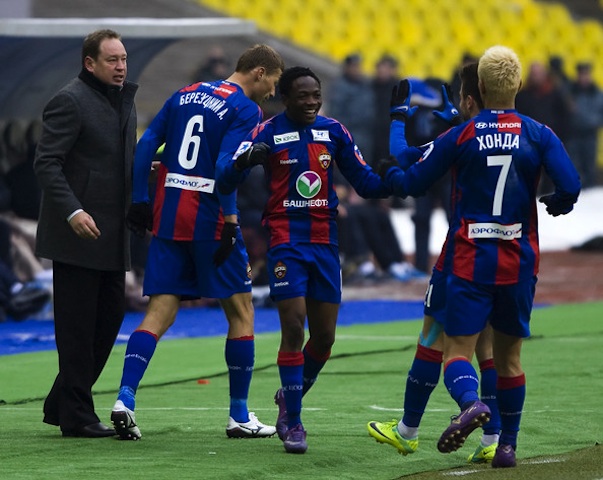 Ten-man CSKA Moscow clinched the domestic double on Saturday with a 4-3 penalty shoot-out win against Anzhi Makhachkala after the Russian Cup final at the Akhmat-Arena in Grozny ended in a 1-1 draw.

With no further scoring in the 90 minutes or in extra time, the final was decided on penalties, Seydou Doumbia scoring the decisive kick for the club from the capital.

“It was an unbelieveble match and a very hard-earned win,” said CSKA coach Leonid Slutsky, whose side won their first Premier League title since 2006 by finishing two points clear of Zenit St Petersburg.

“It’s a great achievement for us to win the double. Anzhi are a terrific team and have become one of Russia’s top clubs in a very short period of time. They played really well today but we were just slightly better.”

The Red Army side started well and took the lead just seven minutes in, Musa’s effort squirming past goalkeeper Vladimir Gabulov from a tight angle.

Spurred on by 20,000 fans who had made the short trip from neighbouring Dagestan, Anzhi pushed forward in search of an equaliser but missed several clear chances before Diarra finally pulled them level in the 74th minute with a powerful strike into CSKA ‘keeper Igor Akinfeev’s top-right corner.

CSKA were then dealt a blow three minutes from the end of regulation time when Swedish midfielder Pontus Wernbloom was shown a straight red card for a dangerous challenge on Lacina Traore.

CSKA’s Brazilian forward Vagner Love came closest to winning the game after that, but it came down to penalties. Yuri Zhirkov had his kick against his old club saved while Jucilei also missed, leaving the path clear for Doumbia to score the winning kick.

It is the seventh time CSKA have won the Cup since the fall of the Soviet Union.