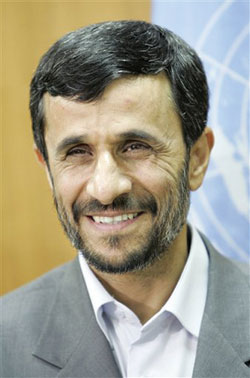 Iranian President Mahmoud Ahmadinejad’s helicopter had to make an emergency landing in the northeast on Sunday after an unspecified “accident,” the presidency reported, adding that he was unhurt.

“The helicopter carrying Dr Ahmadinejad and a number of officials on Sunday had an accident, but the pilot managed to land the aircraft safely,” the website president.ir reported.

He had been en route to inaugurate a local project in a mountainous region of northeast Iran when the incident happened.

“With God’s help the president and the officials accompanying him were not hurt. After the landing the president inaugurated the project and returned to Tehran by car,” the website added.

It did not give any more details about what happened in the “accident” or mention the make of helicopter.

The Islamic republic has been subject to harsh international sanctions over its disputed nuclear programme, with spare parts for both military and civilian aircraft affected.

In addition to buying planes and helicopters from Russia, China and Ukraine, Iran maintains that it can also manufacture aircraft including drones domestically.

Ahmadinejad is coming to the end of his second term as president of the Islamic republic.

Eight approved candidates are standing for president in an election on June 14, and Ahmadinejad’s term in office ends on August 3.