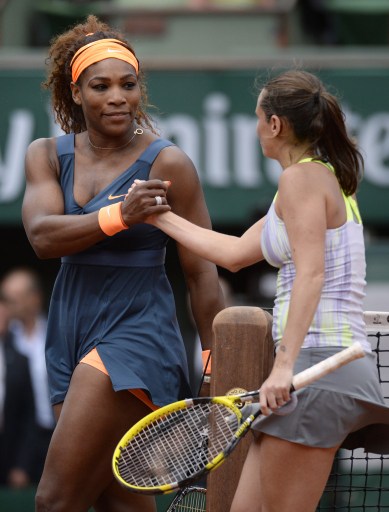 Serena Williams reached the quarter-finals at the French Open on Sunday by defeating Roberta Vinci of Italy 6-1, 6-3.

She virtually bludgeoned her way to another lopsided win at the French Open on Sunday as she continued her quest for a second French Open title, 11 years after her first.

The top seeded American needed just 70 minutes to dispose of the world’s top doubles player, Roberta Vinci of Italy, 6-1, 6-3 and in four matches at Roland Garros this year, she has dropped just 10 games.

The win puts her into a quarter-final matchup against unseeded Svetlana Kuznetsova of Russia who won the title in Paris in 2009 after defeating Williams in a quarter-final thriller.

And it takes her career-best winning streak to 28, the third longest since 2000 behind sister Venus (35) and Justine Henin (32).

As in the previous three rounds Williams asserted her authority from the start, jumping out into a 4-0 lead. The only trouble she occasionally had came from the windy conditions that disrupted her service action.

Vinci got on the scoreboard when Williams hit long with a forehand in the fifth game but two games later, the set was done and dusted for the American in just 29 minutes.

The Italian had only her textbook slice as a weapon to keep powerhouse Williams at bay and that was never going to be enough.

She did hang on till 3-3, with Williams getting increasingly frustrated with the gusting wind, but there it ended as the American turned on the power once more to speed away.

A second French Open triumph on June 8 would give Williams 16 Grand Slam titles, two short of fellow Americans Martina Navratilova and Chris Evert who are tied for fourth place on the all-time list on 18.

The 27-year-old Russian won the second of her two major titles in Paris in 2009, but since then she has struggled with injuries and loss of form, slipping to 85th in the world rankings at the start of the year. But a run into the Australian Open quarter-finals boosted her confidence and she once again, as an unseeded player, drew inspiration from the claycourts at Roland Garros to record her best win of the year.

Kerber was under pressure on serve early on, but she was the one to grab the first service break of the match to take a 4-3 lead. She handed that back immediately and the more aggressive Kuznetsova then won the next two games, sealing the set with a crosscourt forehand winner.

The Russian made it five games in a row to lead 2-0 in the second before Kerber stopped the rot with a break of her own to level at 2-2.
The German went on to break again in the ninth game and served out to level the match. But it was Kuznetsova who dominated the deciding set winning four games in a row to lead 4-1 and then holding serve twice.