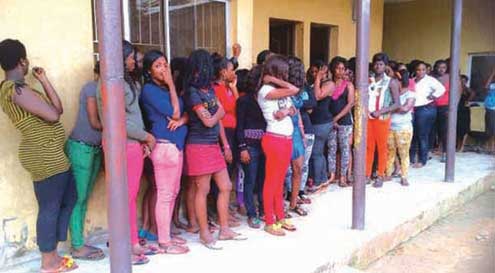 . The ladies lured into prostitution are from Benin City

Spanish police said Sunday they had broken up a ring that smuggled in women from Nigeria and forced them into street prostitution by burning them with irons and using voodoo rituals.

Police arrested six Nigerian nationals, including the suspected woman ringleader, as part of an investigation launched last year after one of the prostitutes filed a complaint with the authorities.

“The control exercised over women was total, involving verbal threats as well as physical violence and various voodoo ceremonies to terrorise them,” police said in a statement.

“The ring caused them serious injury through bites or by using an iron to cause second-degree burns.”

The ring recruited women in Benin City, Edo State, whose husbands and fathers had died and who were struggling to raise their children.

They transported the women overland to Morocco and then smuggled them on small wooden boats into Spain where they were forced to work as street prostitutes in Barcelona and Malaga.

Spanish police have swooped several times in past years on similar prostitution rings that used the threat of voodoo curses to frighten their victims into obedience.

Before leaving Nigeria, the rings often take their victims to shrines where they swear to pay their debts to the group and not to denounce them to the police.

The women leave fingernails, hair, underwear and other personal items at the shrines which they are told will give voodoo priests the power to harm them wherever they are in the world.