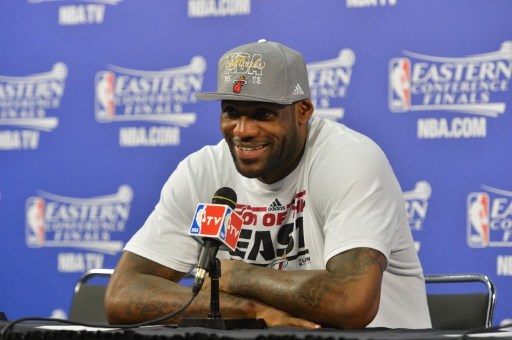 LeBron James at a press conference

MIAMI,Florida (AFP) LeBron James scored 32 points and the defending champion Miami Heat advanced to the NBA Finals for the third year in a row on Monday with a 99-76 rout of the Indiana Pacers.

The Heat captured the best-of-seven Eastern Conference final four games to three and booked a championship series showdown against the San Antonio Spurs that will open on Thursday at Miami.

“They were just aggressive. They had that killer instinct, that look in their eye,” Pacers coach Frank Vogel said of the Heat. “They weren’t going to be denied. Their ball movement was spectacular.”

“It was about finding a way to win at home,” Wade said. “It’s game seven. You have to give everything you have got. My teammates did some things to loosen me up and that got me going.”

The Heat lost to Dallas in the 2011 championship series but defeated Oklahoma City for last year’s crown.

“Going back to the final three straight years is an amazing feat,” said Wade, who had his best scoring night since April 23. “I’m glad we were able to do it.”

Miami won both regular-season meetings with the Spurs, but each team benched top talent on the other’s home court, leaving neither game a true test of what they could offer with the title on the line.

“We just got finished with a two-fisted series and now we have got to get ready for what that great team is going to throw at us,” Wade said.

James, the NBA Most Valuable Player, plans on the Heat giving the Spurs the same treatment they have their previous playoff rivals.

“Our game plan will not change,” James vowed. “We disrupt. We fly around. We help one another. We share the ball offensively. The only thing that changes is the personnel we’re going against.”

Miami swiped much of the drama Monday with a dominating second quarter, outscoring Indiana 33-16 to seize a 52-37 half-time edge.

“That first half was dispiriting,” Vogel said. “Give them credit. With their season on the line, they just brought a whole ‘nother level.

James scoring 18 points in the first half and said Miami’s mindset was to be aggressive.

“Just win, by any means necessary,” James said. “We came out and took care of business.”

The Pacers made 15 turnovers in the first half, 10 more than Miami, and the Heat made eight first-half steals to only two for Indiana. For the game, Miami had 11 turnovers, half Indiana’s total. Miami had 11 steals. Indiana had four.

“We just turned the ball over too much,” Indiana’s David West said. “With a team of this caliber on their home court, it’s too much to overcome.”

In the second half, the Heat stretched the margin and held the Pacers at bay to the finish.

“Our respect goes to the Pacers. They made us play better,” Heat coach Erik Spoelstra said. “We had to play our best game of the series to get this done. The competition brought out the best in us. There were harrowing moments.”

Roy Hibbert led Indiana with 18 points, but the Pacers fell one game short of reaching the NBA Finals for the first time since 2000.

“Disappointed but encouraged about the future,” Vogel said of the team’s locker room gloom. “I told them keep their heads high. Nobody gave us a chance to get this far. We overcame an awful lot to grab the nation’s attention.

“Everybody knows who the Indiana Pacers are now.”