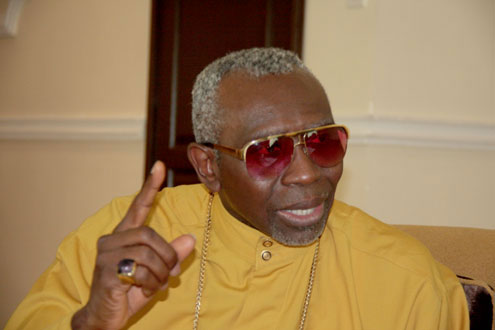 Controversial and flamboyant President of the Christian Association of Nigeria, CAN, Pastor Ayo Oritsejafor, on Tuesday called for the arrest and investigation of former Head of state and Presidential candidate of the Congress for Progressive Change, CPC, Gen. Muhammadu Buhari (rtd), following what he considers as inflammatory statement credited to the former Head of state which was reported in the media recently.

In a press release made available to newsmen in Abuja by Mr. Kenny Ashaka, the
Special Assistant on Media and Public Affair to the Pastor Oritsejafor, the CAN President noted that he has read another divisive and inflammatory statement by Muhammadu Buhari, where the General was widely reported by several national newspaper correspondents and commentators, who monitored the Liberty Radio’s ‘Guest of the week’ programme, where Buhari questioned the “special treatment” given to the Niger-Delta militants by the Federal Government while the Boko Haram members were being killed and their houses destroyed by government.

The former Head of state was said to have stated that the Niger-Delta militants were trained in some skills and were given employment, but that the insurgents in the north were being killed and their houses were being demolished.

“What brought this? It is injustice”, the former Head of State was quoted to have said.

Pastor Oritsajefor noted that the activities of the Boko Haram sect had adversely affected christians in the region where the insurgents operate.

“I cannot wish away the outburst of harshly critical statements, especially as some of them are directly related to the defense of the Boko Haram sect whose members have continued to kill, maim Christians and burn Churches. I feel the pain inflicted on Christians living in the north. The pains are too deep for us in CAN to ignore any unsavory statement that tend to portray innocent Christians who have been killed by the sect members as the aggressors”.

The CAN President further stated that “It is shocking that at a time well-meaning Nigerians are praying for the success of our soldiers, Buhari, rather than reflect the mood of the nation in his statements and conducts is indulging in careless statements without regards for victims of the sect’s violence who are mostly Christians”.

He reiterated his position that Boko Haram is not inspired by pecuniary motives, as evidenced by the latest statement by Robert Fowler, the released former United Nation’s envoy to Niger Republic who said in a BBC programme, “Hard Talk”, aired on Tuesday, 4th of June, 2013, that his captors never talked of poverty but islamisation of Africa.

“Spent and defeated politicians with outburst of temper and elders like Buhari who take delight in inflaming religious and ethnic passions should, therefore, be arrested and made to explain some of the issues raised by them. This is why I call for the arrest of Buhari now. Buhari is a big security risk to Nigeria’s cooperate existence” he declared.

He expressed displeasure over Buhari’s support for Islamics who seek to throw the nation into religious crisis.

“It is laughable that Buhari, an ex-Head of State, a General in the Nigerian Army who has served this country in different capacities would support Islamists who are confronting those in his constituency who are fighting to keep the nation from dismemberment. For Buhari who has led a Brigade of troops in 1982 to repel invading Chadian troops from the same north-eastern borders of Nigeria, the first major foreign invasion, to oppose a state of emergency when some parts of Borno and Yobe States had been occupied and the Nigerian flag replaced with theirs, burnt Churches, schools, government institutions, killed innocent Christians, attacked traditional rulers and others not sympathetic to their cause, speaks volume”.

“The retired General’s sad commentary has not portrayed him as a national leader. As a retired General, he should have known that fights against terrorists are not mere child’s play. They are much more difficult than conventional war which he fought in 1982. If Buhari is a national leader, he should have been more concerned about the killings of innocent ones by the sect members and the success of the troops and not that of terrorists as he has been doing”.

Oritsejafor stated that Buhari’s comments, coming at a time Nigerians have been quite appreciative of the bold steps taken by President Goodluck Jonathan to rid the north of Nigeria’s enemies, can only mean that the retired General is a fanatic and therefore, the prime leader of this religious and blood thirsty sect called Boko Haram.

Declaring his dislike to Buhari’s comments, the CAN President believed that Buhari is making these distasteful and unacceptable comments only as a way of escaping from the wrath of the sect members after their attack on his native Daura town.

Taking his anger atthe retired General further, Oritsejafor stated that if Buhari is now crying out that the Boko Haram members are who are being killed in the fight against terror, that it can only mean that the boys he intended to use to spill the blood of monkeys and baboons on the land are being decimated by the gallant Special Forces.

He admonished the CPC leader further by informing him that the time to grandstand for 2015 election is not now and call on him and his fellow travelers to remember that we are all Nigerians, our religion and regional leanings notwithstanding.