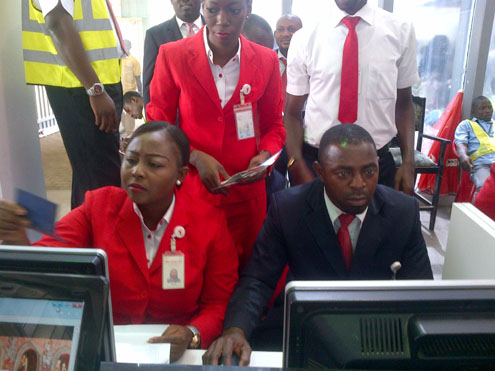 Names of Dana Air crew who perished along with 150 others in the 3 June, 2012 plane crash are not on the cenotaph unveiled by the Lagos State government on Monday, the airline said on Tuesday, a day after the first anniversary of the air disaster which claimed 157 lives in Iju-Ishaga area of Lagos, southwest Nigeria.

“Their names are not there,” said Tony Usidamen, Dana Head of Corporate Communications.

The cenotaph contains 156 names of the 157 people who died during the plane crash. Many are wondering where the government got other names to arrive at 156 when the names of the seven Dana staff members are not on the cenotaph.

Human rights groups have also expressed concern over the broken plane on the cenotaph, saying it portrays air travel in Nigeria as unsafe and sends a negative message to children in Iju-Ishaga where the crash occurred.

“Putting a broken plane there sends a negative signal about our aviation industry. It tells people who see it that air travel is unsafe and dangerous and can result in air crashes,” said Comrade Declan Ihekaire, National Coordinator Concerned Human Rights of Nigeria.

“It will have a long time psychological effect on the people affected and those who live around that area. It will tell children yet unborn that there is always a possibility of an air crash every time they see a plane. It was not the right thing to do, it must be changed,” Ihekaire said.

Meanwhile, investigation into the cause the Dana plane crash is near completion and four interim recommendations have already been made, Nigeria’s Accident Investigation Bureau, AIB, said on Tuesday.

“Outstanding investigative activities are near completion to be followed by the production of the final report,” said Tunji Oketunbi, AIB Head of Public Affairs.

“Four interim safety recommendations have been issued, and have been implemented by the operator and the regulatory agency,” he said.

Oketunbi said the report will be in compliance with applicable ICAO standards to include factual information, analysis, findings and recommendations.

“Despite the heavy destruction of the aircraft due to impact and fire, in addition to other post crash disturbance of the wreckage, which resulted in the absence of substantial physical evidence and flight recorder data that would have provided information on the operation, performance, and mechanical integrity of the airplane, the investigation has progressed significantly,” Oketunbi said.

He said the investigative activities have included the full participation of the State of Manufacture/Design represented by the US National Transportation Safety Board and US Technical Advisors, the US Federal Aviation Administration, The Boeing Company, and Pratt & Whitney Engines.

“The activities have included interviews of relevant personnel of the aircraft operator, the regulatory agency, service providers in addition to other personnel familiar with the operational and regulatory oversight aspects pertinent to the accident flight,” Oketunbi said.

He said the interviews and review of records have also provided significant background information about the flight crew experience.

“Additionally, the examination of aircraft/engine components, reconstruction of the accident flight using recorded air traffic radar and cockpit voice recorder information, forensic, computer animation, sound spectrum analysis, chemical analysis of fluid and other substances along with investigative research have appreciably advanced the progress of the investigation,” he said.

Oketunbi said the safety issues identified during the investigation are engine and related system performance, flight crew performance, validation of foreign pilot certificates, pre-employment background checks of pilots and the maintenance of documentation.

Oketunbi said in accordance with ICAO Annex 13, the sole purpose of the investigation is to prevent aviation accidents and incidents.

“It is not the purpose of any such investigation and the associated report to apportion blame or liability,” he said.