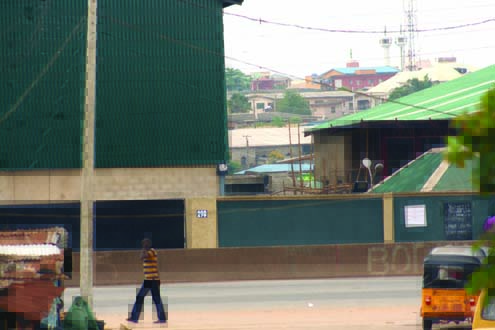 The police in Lagos have launched a manhunt for the suspected kidnappers of the Managing Director of Smartpoly Products and Tokslordmat Ltd., Martins Adams, and his only son, Ireoluwa Adams, 7.

They were abducted on Sunday at about 5.30 p.m. at the company premises on 298, Lagos-Abeokuta Expressway, Pleasure Bus Stop, Iyana Ipaja, beside NNPC filling station.

A source at the Elere Police Station in Agege, Lagos confirmed today that a director in the company reported the kidnap of the Managing Director of the polythene manufacturing companies and his son to the police.

“We learnt that the gunmen followed the family into the company premises which also served as their residence immediately they arrived from the church on Sunday in their car. They covered the man’s mouth with a cloth and tied the wife. They later transferred the man and his son from the car to their waiting car. At the gate, they told the gateman to go inside and untie the wife, and sped off,” the source narrated to P.M.NEWS.

The source said immediately the gunmen sped away, the gateman took the phone and the company’s register at the gate and fled.

He revealed further that the abductors demanded for the payment of N30 million ransom for the release of the polythene manufacturing magnate and his son.

A man who identified himself as the personal assistant to the kidnapped Managing Director, however, came out to talk with P.M.NEWS after much persuasion.

The assistant who gave his name as Abiodun Samuel denied that his boss and his son were kidnapped.

He disclosed that he was with his boss yesterday before he travelled, adding that his son was at home with the mother.

The following conversation ensued between the assistant and P.M.NEWS.

PMNEWS: We received information through an e-mail that the Managing Director of the company and his seven-year old son were abducted on Sunday within the company’s premises.

P.M.NEWS: When last did you see the MD?

Assistant: I was with him yesterday and we talked before he travelled.

PMNEWS: Okay, can I have his phone number to speak with him?

Assistant: I told you he has travelled. You can’t speak with him.

P.M.NEWS: What about his wife, can I speak with her?

Assistant: No, you can’t speak with her. She is at home with her son.

P.M.NEWS: Okay, give me the address, let me go and see her.

Assistant: They live within the premises.

P.M.NEWS: Let me go in and speak with her now, at least, to confirm that she is well like you claimed and that her only son was not kidnapped.

Assistant: I’m sorry, you can’t go in. I’m under strict instruction not to allow anyone in.

P.M.NEWS: Are you hiding anything from me?

Assistant: No, but that is the instruction I was given. You can give me your card and I will get in touch with you later.

(Our correspondent gave him his call card and he slammed the gate on his face).