In Brazil, the Yoruba gods are alive 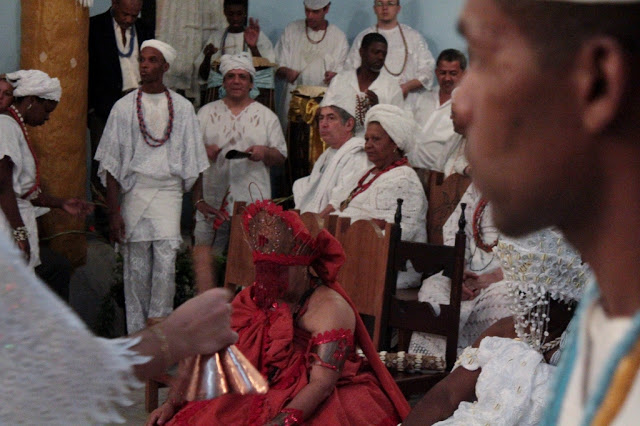 worshipping the orishas in Brazil

.While Yoruba traditional worship, the gods and goddesses are being ignored by Yorubas,in preference for Christian pentecostalism, descendants of the race in the diaspora keep the faith

SAO PAULO (AFP) – Doctors told Julio Penna in 1976 that he needed to undergo corrective spine surgery but faced an 80 percent chance of being condemned to life in a wheelchair.

Penna refused and instead sought help from Candomble, Brazil’s Africa-rooted religion based on worship of deities known as orishas that link humans to the spiritual world.

Today, the 69-year-old, who is of Italian and Portuguese descent, is walking unhindered and is a high-ranking disciple of a faith that has a powerful hold on many Brazilians of all races in the world’s biggest Catholic country.

Despite lingering prejudice and intolerance, mainly from evangelical extremists, Candomble and the related faith of Umbanda are attracting a growing number of followers across this vast country of about 190 million.

People often turn to the two faiths to seek relief from pain or to embark on a spiritual quest, practitioners say.

Telma Witter, a 57-year-old artist, said her husband turned to Candomble as a last resort when he was dying from an auto-immune disease.

“He was able to live an extra four years. That convinced me,” she told AFP.

A white Brazilian, she fully embraced the faith after reading the works of the late French anthropologist Pierre Verger, a respected practitioner himself who also did extensive research on Candomble both in Brazil and Africa.

In April, Mae Sylvia — a mix of spiritual guide, faith healer and community leader — and her disciples held an open house to honor the deity Oxossi, one of 16 orishas in West Africa’s Yoruba mythology.

For hours, devotees in brightly colored garb, including women in billowing hoop skirts, chanted in the Yoruba language and danced around a sacred altar to the pulsating beat of ceremonial drums, with some falling into a trance as spirits apparently took possession of their bodies.

Developed by African slaves brought to Brazil from the 16th century, Candomble has various branches (Ketu, Nago, Angola, Jeje) based on the beliefs of these distinct ethnic groups. It also incorporates elements of Catholicism, with some orishas paired with analogous Christian saints.

Trained in Nigeria in the Ketu (Yoruba) branch of the faith, Mae Sylvia has over the past three decades tutored nearly 3,000 disciples, many of whom went on to open their own temples across the country.

“We have black, white, indigenous and even Japanese members. We are open to all,” she told AFP. “Every human being has within himself the axe (energy) of the orishas, but that powerful life force needs to be harnessed and developed.”

Mary Yamanaka, a 60-year-old Japanese Brazilian artist, said she joined the temple last year, attracted by the aesthetic appeal of the rituals, which can include animal sacrifices, essentially to please the orishas.

Mae Sylvia provides spiritual guidance to devotees, communicating with the orishas through divination based on shell reading and numerology.

Each follower is paired with a specific orisha, who is connected to a force in nature and worshipped with offerings of foods. Those aspiring to be priests must go through lengthy initiation rites that last at least seven years.

Best known orishas are Olorun (Supreme Being), his son Oxala assimilated to Jesus Christ, Shango (god of fire, thunder and justice), Ogun (warrior deity of metal work), Oxossi (hunter deity of the forest), Oshun (goddess of love, marriage and maternity) and Iemanja (the goddess of the sea and patron deity of fishermen).

Until the 1970s, the faith was officially banned and thus practiced in secret. Even today, many followers are reluctant to publicly admit that they are adherents.

For that reason, it is difficult to accurately size up the country’s Candomble community. Some estimates put it at two million members, but the real figure is likely to be considerably higher.

And today, Candomble, also practiced in neighboring countries, is enjoying a revival as an affirmation of African identity and pride, particularly in the northeastern state of Bahia state, the heart of Afro-Brazilian culture.

Official persecution of Candomble was part of a bid to eradicate African influence and led to the emergence of Umbanda in 1908, said Mae Sylvia.

Umbanda incorporates not only the cult of the orishas, but also elements of Catholicism, indigenous beliefs and the European spiritist movement developed by Frenchman Allan Kardec in the 19th century.

Because it is less Africa-centered and excludes animal sacrifice, it has a much broader appeal among white Brazilians.

Rubens Saraceni, a white Brazilian medium, is a prominent Umbanda priest and writer.

“Candomble keeps a very strong heritage from Africa, while Umbanda gives equal weight to indigenous beliefs, spiritism and Christianity,” he explained during a festival honoring the deity Ogun in April.

Nearly 1,000 disciples, most of them whites, attended the Ogun festival, chanting, dancing and breaking into trance during spirit possession.

Saraceni estimates that with 600,000 Umbanda centers operating nationwide, the faith has at least eight million declared followers and keeps growing every year.