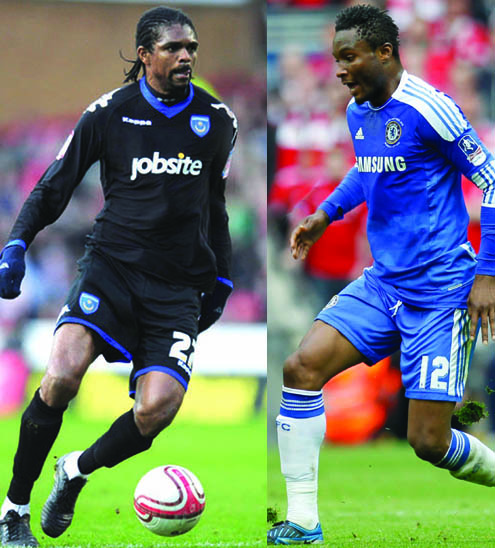 Shortly after Chelsea defeated Benfica to win the Europa League title in Amsterdam, Mikel Obi, joined his teammates to celebrate their European heroics. Although Mikel was an unused substitute, he is an integral part of the team. Since joining Chelsea in 2006, Mikel has racked a number of individual and team medals.

But does that mean he is the most adorned Nigerian footballer? Has he really achieved more than Kanu Nwankwo? Football fans across the country have often argued this but here is our analysis. Mikel’s success has been achieved at one club, Chelsea. Since Russian oligarch, Roman Abramovich, bought the club for only £120 million, he has since revolutionised the club and Mikel has been part of it, although the midfielder his yet to score in the Premier League in 281 matches.

Kanu on the other hand is an enigma. He has flourished at every club he had played for except for Inter Milan where he played 12 games and scored one goal. Prior to when he joined Inter Milan, Kanu won the UEFA Champions League with Ajax, playing 54 times and scoring 25 goals for the Dutch champions. Then he joined Inter from Ajax for $4.7m. At Inter, Kanu underwent a medical examination which revealed a heart defect. In November 1996, he underwent an operation to replace an aortic valve and did not return to his club until April 1997.

He was sold to Arsenal for £4.15 million in 1997. Kanu quickly revived his career at the North London club and he became known for his goalscoring ability from the bench. He scored many important goals for the club, the most memorable being his hat-trick against Chelsea in the league. It took him 15 minutes to overturn a 2–0 deficit to a 3–2 victory.

When Kanu left Arsenal, he joined West Bromwich Albion later Portsmouth. At Portsmouth, Kanu scored in the FA Cup semi-final win against West Bromwich Albion, 1-0, and then the only goal in the final against Cardiff City. Kanu soon relegated with Portsmouth to the Championship and in 2012 he retired from football. His only regret in football would be that he never scored for the Super Eagles at the Africa Cup of Nations despite participating at five editions.

Kanu and Mikel have both accomplished great things but who is adorned? We will leave you to be the judge of that.

But he was not just a hero at club level; he also shone for the national teams. Most memorable were his heroics at the 1996 Olympics in Atlanta where he helped Nigeria claim a gold medal. Kanu won the FIFA U-17 World Cup in 1993 and Olympic gold medal in 1996. With the senior national team, the closet he got to winning the African Cup of Nations was in 2000 when Nigeria finished as runners-up.

Kanus’s trophy cabinet is enviable so is Mikel’s. Since he caught the eye with his brilliant display at the 2005 FIFA World Youth Championships, where he won the Silver Ball after being voted the tournament’s second best player, behind Lionel Messi, he has accomplished quite a lot.

Football pundits have often labelled Kanu the greatest Nigeria player based on the number of titles, accolades and awards but also because of his playing style and technique. For Mikel, he is just 26 and could win more titles with Chelsea.