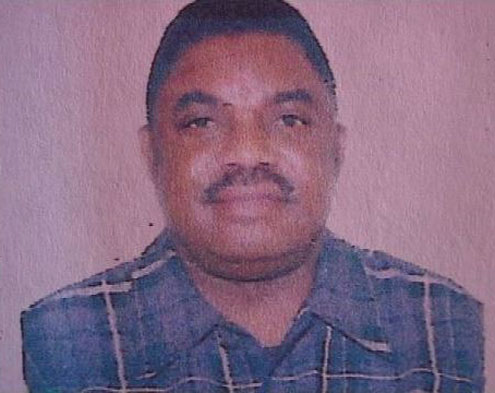 A 57-year old Nigerian cab driver Solomon James Okoroh was shot dead around 3 a.m Tuesday in the 2400 block of Ontario Road, Adams Morgan, by two men who tried to rob him while riding in his cab, according to District of Colombia police.

The murder of Okoroh unfolded right in front of police, who took off after the suspects and chased them down under heavy gunfire.

Police say Solomon Okoroh was murdered around 3:15 a.m. Tuesday after picking up two men in his cab. Officers working a robbery detail in the neighborhood saw the cab in distress and then heard the gunshot before it crashed into a sign and parking meter near Ontario and Kalorama Roads.

The two suspects bailed out and got into a running gun battle with officers. Police caught one of them in the street, but the other tried to hide in a nearby apartment.

“There were 20 shots fired at them, 20 shots,” said Jim Graham, (D-Ward 1) the D.C. councilmember who represents this part of the city.

“The tragedy is horrible, but the remarkable thing is the police were right here.”

Police caught and arrested both suspects. One of them, 32-year old Ercell Overton, is charged with first-degree murder, felony assault on a police officer and burglary. The other suspect, 24-year old Joshua King, is being held on an unrelated probation violation.

“What happened was there was an apparent robbery of a cab driver that led to the murder of that cab driver,” Graham said explaining the apparent motive.

Okoroh had driven for Classic Cab Company for about 15 years. The company says he had a wife and five children. He was more than a cabbie to them, he was a friend.

“I tell you, all cab drivers are scared for this to happen, because say for $10 or $15 fee, it is not justified to die,” said Chamroeum Muy at Classic Cab.

Those who knew Okoroh said he had been warned about the dangers, but wasn’t one to discriminate.

“This is very terrible because he is one of the few guys that will not pass anybody. He stops for everyone, he stops for anyone,” said Evelyn Ruiz.

She last saw him Saturday when he came by Classic Cab to pick up his insurance card as he did every week.

Okoroh lived in Glenarden, Md. He leaves behind a wife and five children. His son, Prince, plays basketball at Howard University.

A friend read a statement from the family saying in part, “We are saddened such a senseless act took the precious life of Mr. Solomon Okoroh, a very spiritual man, a deacon that loves his church but more than that a family man that loves his family.”

Police say the 57-year-old cabbie was shot in the shoulder and later died.

Despite the heavy gunfire, neither the suspects nor police was hit.