It's Not Time To Celebrate 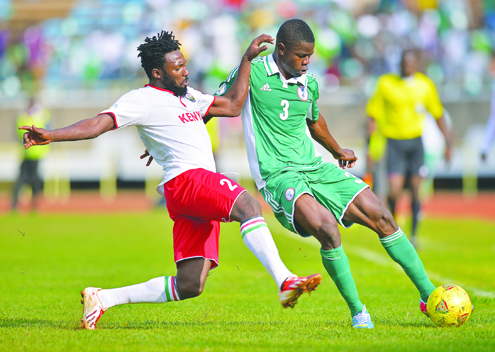 Despite recording a 1-0 away victory over Harambee Stars of Kenya in Brazil 2014 World Cup qualifier at the Moi International Sports Centre, Kasarani, Nairobi yesterday, Chief Coach of the Super Eagles of Nigeria, Stephen Keshi has warned his wards not to celebrate yet as they still have a lot of work to do.

CSKA Moscow of Russia winger, Ahmed Musa scored the match winner deep into the second half of the match, sending the Eagles to top of Group F, but Keshi warned his players that they should suspend their celebration until when the World Cup ticket has been secured.

According to the former Hawks of Togo coach, “our focus is now on the match against Namibia in Windhoek next Wednesday. We have to pick the maximum points from that match as well, to make sure of our progress in the race, even ahead of the last match in the group.”

Supersport reports that the Eagles are in celebration mood after picking three points in Nairobi yesterday. Winger, Nnamdi Oduamadi said the win had a special feel about it after the “difficulties the team faced” before the encounter.

“This not just any victory and it means a lot to all of us. The difficulties the team faced made it a very hard game but we never doubted we would win,” Oduamadi told supersport.com after the game.

Midfielder, Sunday Mba took to the social networking site, Twitter to voice his sentiments after the game.

“Tank God for tdays game ….. Tnks all for d best wishes #we appreciate ur prayers,” Mba tweeted via @mba_Sunday.

Left back, Elderson Echiejile also took to Twitter to express his joy at the win over the Harambee Stars.

“Great 3 points thanks to the naija supporters that came out u guys were great! Next on our mind is Namibia game,” Echiejile added via @EldersonEch.

Chelsea midfielder, Victor Moses did not play the game as he was excused by head coach, Stephen Keshi on medical grounds.

The 22-year-old however proved his patriotism following a rather revealing tweet hours after Wednesday’s game.

Meanwhile, Harambee Stars assistant coach has admitted that his strikers were not sharp going forward after the team faltered yet again to Nigeria.

“We were very poor upfront. We could not commit Nigerian defenders and even keeper Vincent Enyeama was on a holiday,” James Nandwa told Goal after the match.

“We also conceded an easy goal because of lack of concentration. The defenders went to rest allowing Ahmed Musa to pounce and score the winner.”

“We dominated most of the first half but we looked very dead and buried in the second. It was one of the worst defeats to swallow because I don’t think we deserved to lose.”