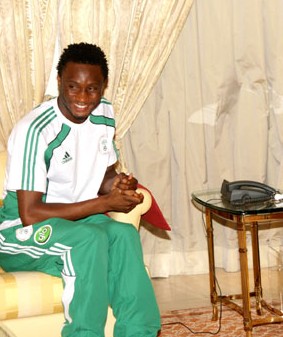 Chelsea midfielder Mikel Obi is backing the Super Eagles of Nigeria to become the first African team to win this month’s Confederations Cup in Brazil.

Cameroon boast the best African result in the competition when they lost in the 2003 final to France.

“It will be great to win the Confederations Cup and add to my medals collection. It will be another history for Nigeria and Africa,” said Mikel.

The former Lyn Oslo of Norway star is expected to play pivotal role at the competition involving continental champions, which kicks off in Brazil on 15 June.

Mikel made his Eagles’ debut eight years ago in a friendly against Libya in Tripoli just months after he impressed at the FIFA U-20 World Cup in the Netherlands, where Nigeria lost to a Lionel Messi-inspired Argentina in the final.

The 26-year-old has since grown in stature as he won several major honours with Chelsea including the UEFA Champions League last year and the Europa League this season.

He has often been criticised for not showing enough commitment to the national team’s cause but he shamed his critics when he played an integral role as Nigeria were crowned African champions for a third time in February.

“Mikel was outstanding at the Nations Cup. Even though he is still young, he has a lot of experience as he has been at the top for a long time,” remarked former Nigeria international Garba Lawal.

“He has been successful and he is only getting better.”

“Mikel is very influential for Nigeria and he will do more for both club and country going forward,” added ex-Nigeria skipper Mutiu Adepoju.

Mikel started out as an attacking midfielder with the Nigeria under-17 team and was hailed as heir apparent to the legendary Augustine ‘Jay Jay’ Okocha, but he was later converted to a holding midfielder by Jose Mourinho.

He may not be spectacular but he is tactically disciplined and gets the job done by ensuring the defence keep their shape at all times.

His efficiency has been rewarded with a contract that keeps him at the London club till June 2017.

His club career has further received a major boost with the return to Stamford Bridge of his mentor Mourinho.

In the Eagles’ midfield, he enjoys a less restrictive role as Lazio youngster Ogenyi Onazi and Nations Cup hero, Sunday Mba do much of the grafting for him.