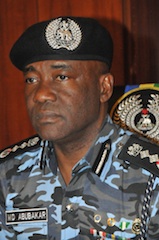 The hammer has fallen on two policemen who were on duty when a woman, was raped by two men inside the cell of Abraka Police Station.

The station’s cell guard on duty on the fateful day was dismissed from the police force, while an Inspector, Mrs. Erebi Akporunor was demoted to the rank of sergeant.

The dismissal and demotion of the two officers followed an orderly room trial carried out by the Assistant Inspector-General of Police, Zone 5, Benin, in connection with the rape saga.

The rape victim who was arrested on 26 February this year, following a quarrel with her neighbour, had petitioned the AIG through her lawyers alleging that she was detained among men at Abraka Police Station where two men raped her in turns, while the policemen on duty that night paid deaf ears to her cry for help.

The two men who allegedly raped her are currently standing trial at a Magistrate’s Court at Abraka.

Meanwhile, the victim through her lawyer, Barrister Efe Ejomafuvwe, has instituted a suit against the Nigeria Police at the Federal High Court in Warri, Delta State, claiming the sum of N750 million damages.