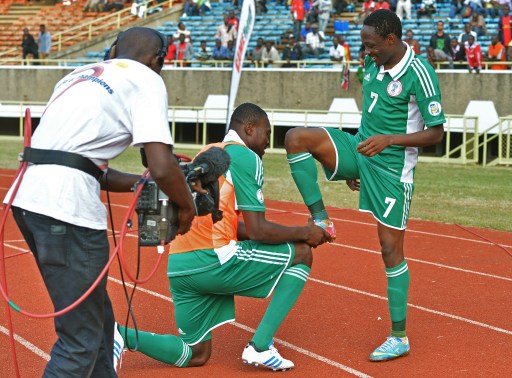 Nigeria shrugged off travel weariness and missing stars to defeat Kenya 1-0 Wednesday and take a significant step toward reaching the 2014 World Cup in Brazil.

The triumph in Nairobi gave the Super Eagles a two-point Group F lead as ciosest challengers Malawi could only draw 0-0 at home against third-place Namibia.

Diminutive Russia-based Ahmed Musa, 20, was the Nigerian star as his 81st-minute goal sunk bottom-of-the-table Kenya before a capacity crowd at the Moi International Sports Centre.

Nigeria have eight points, Malawi six, Namibia four and Kenya two after four rounds and only the group winners stay in the hunt to fill one of five places reserved for Africa at the 2014 finals.

The African champions play in Namibia on June 12 and even a draw there would leave them well positioned to make the final qualifying round, which will comprise five two-leg ties.

After holding Nigeria in Calabar three months ago in the competitive debut of new Belgium-born coach Adel Amrouche, Kenya had high hopes of a first victory over the west African giants.

Even the absence of suspended pair, goalkeeper Arnold Origi and striker and captain DennIs Oliech, and injured midfielder McDonald Mariga did not dilute ‘Harambee Stars’ confidence.

But Nigeria, fielding nine of the team that began the Africa Cup of Nations final triumph over Burkina Faso in Soweto last February, cast aside problems to generally look the likelier winners.

A friendly draw with Mexico in the United States last weekend meant the Super Eagles arrived in Nairobi weary after two flights across the Atlantic and another deep into east Africa.

Turkey-based Ikechukwu Uche, who replaced injured Emenike for the Cup of Nations final, was another notable absentee from Nairobi.

After a dour first half on a bumpy Nairobi pitch, Nigeria came close when Kenya goalkeeper Duncan Ochieng was left exposed and a Nnamdi Oduamadi shot had to be scrambled clear.

Musa was off target as Nigerian pressure mounted, but he atoned nine minutes from time by lobbing a long ball from Celtic defender Efe Ambrose over Ochieng and into the net.

After winning in Namibia last March, Malawi were favoured to complete a double over injury-weakened Namibia on an artificial Kamuzu Stadium pitch in commercial capital Blantyre.

Veteran striker Esau Kanyenda came closest to breaking the deadlock 10 minutes from time when his header eluded goalkeeper Virgill Vries only to rebound off the woodwork.

The Malawi ‘Flames’ host Kenya at the same venue next Wednesday before completing their group schedule away to four-time World Cup qualifiers Nigeria during September.