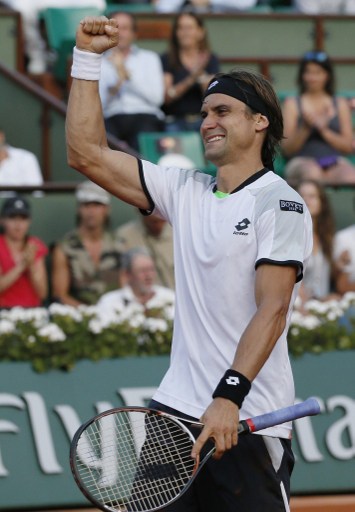 In Sunday’s title match, the third seed will face fourth-seeded compatriot David Ferrer who ended French hopes of a first champion in 30 years by sweeping past Jo-Wilfried Tsonga 6-1, 7-6 (7/3), 6-2.

Nadal will be aiming to be the first man to win the same major eight times while 31-year-old Ferrer will be appearing in his first Grand Slam final.

He has reached the championship match at the 42nd time of asking but now faces overturning a 19-4 career deficit against his compatriot.

Nadal, the third seed, took his Paris record to a staggering 58 wins from 59 matches after recovering from 4-2 down in the deciding set to clinch victory after 4 hours and 37 minutes.

In a dramatic and controversial final set, Djokovic broke for 1-0 before Nadal levelled in the eighth game after the Serb had been handed a time violation and then lost a point when he collided with the net as he put away a smash.

Djokovic even summoned the tournament supervisor onto the court to rage over the court conditions as he prepared to serve at 7-8.

Nadal pounced, moving to three match points and clinched victory when Djokovic, who ended with an ugly 75 unforced errors, hit wild and long.

“It’s a very special win for me and congratulations to Novak — he’s a great champion and he is going to win here at Garros one day,” said Nadal, who had lost the pair’s only other five-setter, the record-setting 2012 Australian Open final.

“When I was serving for the match it was against the wind so I knew that it would be a tough game.

“It was a similar match to the one in Australia in 2012 and he won. This time it is me that won and that is what makes sport so big.”

Djokovic was furious that his demands for the court to be watered were ignored.

“I was not asking to water the court because I want to make my opponent trip or do something like that. I was doing it for myself, because I felt that it got very dry and it was very slippery,” he said.

“If one player says yes to watering of the court and the other says no, in the end whose opinion has more value?”

On Sunday, Nadal will be appearing in his ninth final since returning from a seven-month injury lay-off.

“During these seven months out of the game there were some low moments, but everybody supported me and there was a lot of positive energy,” added the Spaniard, who has already claimed six titles in 2013.

Nadal could have ended the tie before the fifth set as he was twice a set and a break up.

Ferrer ended home hopes of sixth-seeded Tsonga who was out to match the feat of Yannick Noah, who last won the title for France in 1983.

But it was a richly deserved reward for outstanding perseverance on the part of 31-year-old Ferrer, who reached his first Grand Slam final in his 42nd appearance, by far the longest wait in the Open Era.

It will be the first all-Spanish final since 2002 when Albert Costa defeated Juan Carlos Ferrero.

“I am really happy for me to be in the final at Roland Garros. It’s my first ever Grand Slam final,” said Ferrer, who has yet to drop a set in the tournament .

“I am older, but more experienced. I am not too tired, so this is very important. To play the final against Rafael Nadal I need to be 100 percent to be able to play good against him.”

“My opponent played better. There has to be a winner and a loser,” said Tsonga.