One Killed, Two Injured As Container Drops In Sango 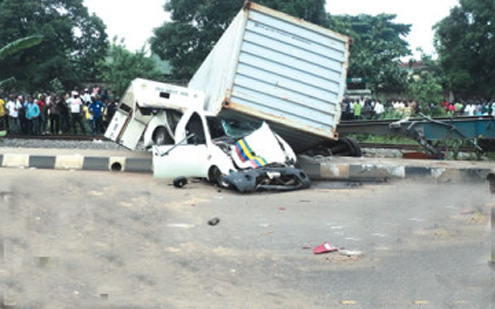 One person was killed Friday afternoon while two others were seriously injured when a truck carrying a container lost control and crushed a hawker of bread in the traffic jam.

The driver of the truck which was coming from Lagos could not control the vehicle when its brake failed and as he was trying to avoid some big pot holes on the road, the container fell off and killed the hawker on the spot.

The truck with registration number GGE 974 XC was still at the scene of the accident at the time of this report, thus causing serious traffic gridlock.

TRACE Zonal Commandant for Ota, Commander Adekunle Ajibade, said the dead victim has been removed and taken to Ifo General Hospital mortuary while the injured are being treated at the hospital.

According to Ajibade, “the accident as I see it, was caused when the brake of the truck failed. It could have been averted if the driver was not speeding, knowing full well that the road is very bad. I want to implore road users to always take things easy because life has no duplicate.”

The TRACE Zonal boss also informed that a similar incident occurred a few kilometres from the accident scene, saying that no person was killed in that incident.

“There was a similar incident around Temidire street but I can confirm to you that nobody was either injured or killed. But as I am talking to you, the gridlock in the area is very serious and our men are doing everything possible to ease the traffic,” he said.

“At Iyana Ilogbo also, due to the ongoing road construction around Iyana Owode road, vehicles are moving on one side and the area is also jampacked now. But our men are also there. I want to advise our people to be calm and be orderly on the road as every effort is being made to ensure that the traffic is free,”  Ajibade said.