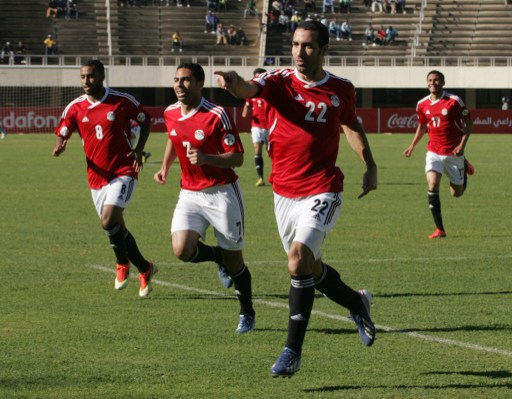 The ‘Pharaohs’ top Group G with 12 points from four wins, but will have to wait until next Sunday for a chance to clinch first place after closest rivals Guinea stayed five points behind by hammering Mozambique 6-1 in Conakry.

Congo-Brazzaville and Tunisia drew in Gabon and Sierra Leone respectively Saturday, leaving Egypt as the only one of the 40 second-stage competitors boasting a 100 percent record.

It was a disappointing outcome for Zimbabwe at a sunny but chilly National Stadium in Harare after losing narrowly in Cairo three months ago, and they remain bottom of the table.

Salah, who helped Swiss club Basel reach the Europa League semi-finals this year, put Egypt ahead for the second time just before half-time and bagged a second-half brace.

Veteran midfielder Mohamed Abou Trika put the visitors ahead on five minutes and Germany-based Knowledge Musona levelled midway through the half before Salah opened his account.

Salah scored again on 76 minutes and substitute Knowledge Billiat reduced arrears only for the Egyptian to complete his hat-trick and condemn Zimbabwe to a third loss in four outings.

Although Egypt won the Africa Cup of Nations a record seven times between 1957 and 2010, they have appeared at the World Cup only twice, and the last time was 23 years ago.

Mohamed Yattara opened and closed the scoring as Guinea finally struck form, Sadio Diallo also netted twice and there was one goal each for Ibrahima Traore and Mohamed Diarra while Helder Pelembe converted a Mozambican spot kick.

Fallen giants Cameroon surrendered first place in Group I to Libya on goal difference after a mini-revival came to an abrupt half with a 2-0 defeat by Togo in Lome.

Shrugging off the absence of unavailable star Emmanuel Adebayor, who has publicly criticised coach Didier Six, the Sparrow Hawks scored in each half through Komlan Amewou and substitute Lalawele Atakora.

Cameroon, who lost all three matches at the 2010 World Cup and failed to qualify for the last two Cup of Nations tournaments, were playing their first competitive game under coach Volker Finke and lacked injured star Samuel Eto’o.

The German, who has no coaching experience in Africa, replaced short-serving local Jean-Paul Akono last month in a change slammed by former star Roger Milla as “a waste of precious money”.

Jonathan Pitroipa, voted the best footballer at the 2013 Cup of Nations in South Africa, threw a lifeline to Burkina Faso with the goal that edged Niger 1-0 in Niamey.

It left the ‘Stallions’, who finished runners-up to Nigeria in the Africa Cup this year, four points behind Group E frontrunners Congo and the countries clash in Pointe-Noire next weekend.

A late first-half brace from Islam Slimani set up Group H leaders Algeria for a 3-1 triumph in Benin with Nabil Ghilas adding a match-clinching third goal after coming off the bench.

This was a must-win match for third-place Benin and Rudy Gestede was first to score at Stade Charles de Gaulle in Porto Novo, but Badarou Nana Nafiou got a second-half red card as they hunted an equaliser.